Duterte to abolish Road Board — Palace 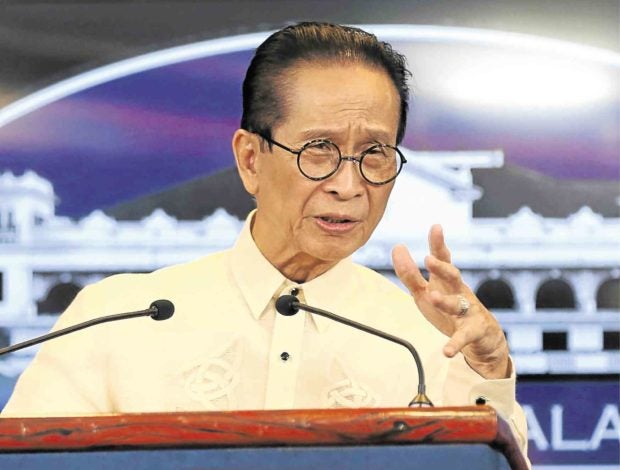 President Rodrigo Duterte will sign the bill abolishing the corruption-ridden Road Board that the Senate and the House of Representatives approved even if the lower chamber later moved to rescind it, Malacañang said on Tuesday.

“Yes, that has been the position … [It will be signed by the President] as soon as it is given to him,” presidential spokesperson Salvador Panelo told reporters on Tuesday.

The Road Board controls proceeds of the road user’s tax, known as the motor vehicle user’s charge (MVUC), which motorists pay yearly for the registration of their vehicles.

Defying the House, Senate President Vicente Sotto III said he would transmit to Malacañang a copy of the bill abolishing the Road Board even without the signature of Speaker Gloria Macapagal-Arroyo.

“As far as we are concerned, [the Road Board] is abolished,” Sotto said on Tuesday, referring to the controversial bill.

In September, the Senate, hoping to dispense with bicameral discussions, passed and adopted the House version of a bill that was approved under former Speaker Pantaleon Alvarez.

The bill dissolves the Road Board on grounds of huge irregularities in the use of MVUC and reverts proceeds of the P45-billion fund to the treasury.

But an hour after the Senate adopted and ratified the House bill, the lower chamber — under new Speaker Gloria Macapagal-Arroyo — rescinded its own approval of the measure, leading to confusion about its status.

“If indeed Speaker Arroyo and her allies want it retained and badly so that it needs to pick a quarrel with Malacañang, it is an overstretch,” Akbayan Rep. Tom Villarin said in a statement.

Villarin said the board was under the executive branch and its abolition was its prerogative.

“The executive knows we abolished it,” Sotto said. “The House abolished it. They also know the President wants it abolished. It’s as good as abolished.”

Panelo said the Palace was against the Road Board because of the misuse of proceeds from the road user’s tax and alleged corruption on the board that Budget Secretary Benjamin Diokno had pointed out.

Panelo said Diokno had relayed the explanation for the abolition of the Road Board to the President.

Malacañang, the presidential spokesperson said, was in favor of abolition because it was necessary to do so.

“We want that the fund be returned to (the National) Treasury and then let Congress appropriate again for specific purpose,” Panelo said.

Disagreement over the release of the MVUC was what triggered the House-led attacks against Diokno over his supposed insertions in the 2019 budget, former Speaker Pantaleon Alvarez said on Sunday.

Alvarez said lawmakers had been conspiring with Road Board officials to extort from handpicked contractors commissions equivalent to 30-40 percent of the total project cost.

“This translates to billions of pesos collected from Road Board money,” said Alvarez, who was ousted as Speaker in July and replaced by Arroyo.

Sotto warned that if the two chambers failed to resolve the deadlock, this might mean a reenacted budget for the entire 2019, instead of just the first month.

“I hope not. I don’t think they should. If there’s a deadlock, then we may have a reenacted budget for the entire 2019,” he said.

The two chambers failed to pass the proposed P3.8-trillion budget before adjourning session for the holidays. Thus, the government would have to operate on a reenacted budget at least for January.

The Senate resumes discussions on the budget on Jan. 14, and will reconcile differences with the House.

Sotto said he was not too concerned about the impasse, claiming that the House leaders who wished to withdraw the Road Board abolition measure would be gone after the 2019 midterm elections.

Sen. Francis Escudero said there was no “clash” between the two chambers.

“The Senate adopted en toto the House bill abolishing the Road Board sans a bicam. Hence, all that needs to be done by both houses is to prepare the enrolled bill and transmit it to [President Duterte] for his signature,” Escudero said in a text message.

A bill is said to be enrolled if both chambers approved it.

Sen. JV Ejercito said he supported his colleagues’ insistence that the Road Board be abolished.

He said the use of the MVUC should be subject to congressional scrutiny.

“For several years the road user’s tax has been used by the Road Board, which doesn’t pass through scrutiny. This is a special fund so it’s not subject to [congressional oversight],” Ejercito said. —WITH A REPORT FROM JEROME ANING