MANILA, Philippines — A social media viral post that says Senators Risa Hontiveros and Francis Pangilinan filed a bill seeking to abolish the 13th month pay of workers is not true.

In a fact-check, Agence France Presse (AFP) debunked Monday the Facebook post that even called the opposition senators “stupid” for supposedly moving to eliminate the workers’ compensation provided under the law.

The misleading post that features Hontiveros and Pangilinan was captioned: “Senators Kiko Pangilinan and Risa Hontiveros File Bill to Abolish 13th Month Pay,” according to AFP.

It even mistakenly identified Hontiveros as a member of the Liberal Party (LP), a political opposition in the Duterte administration. Hontiveros belongs to Akbayan party-list, AFP added.

(These two are really stupid as all voters want to receive 13th month pay as part of reward from companies or offices they work for. Some people even have 14th-16th month pay at the end of the year but then they want it removed, these LP people are really a burden to the nation.) 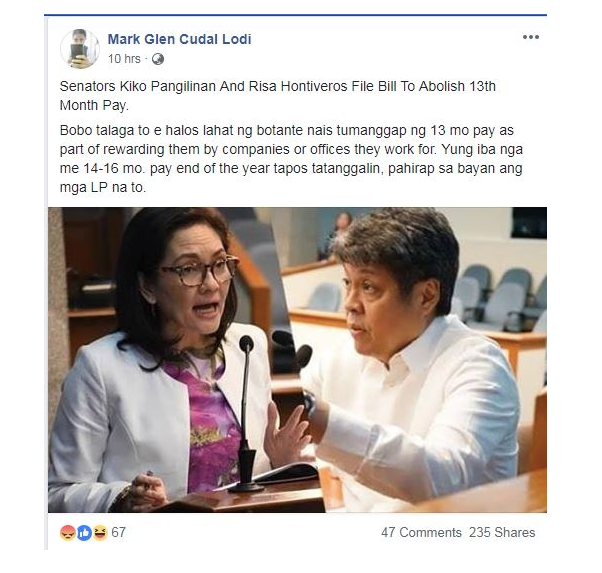 But the French news agency found through a quick search in the Senate’s online archives that a proposed measure purportedly to abolish workers’ 13th month pay was never filed at all by any legislator of the 17th Congress.

Likewise, Julie Laconico, Pangilinan’s spokesperson, discredited the information indicated in the Facebook post and told AFP the bill is “not true.”

ADVERTISEMENT
Read Next
Minorities held in China sew clothes that can end up in US
EDITORS' PICK
Smart launches GIGA Pro with bigger and better data for the new normal
Water remains our saving grace right now
DepEd: Opening of classes moved to October 5
FDA assures no shortcuts in approval of COVID-19 vaccine
‘Russian COVID-19 vaccine may be available in PH by November’
Boost your productivity with the new ASUS ZenBook 13 UX325 and ASUS Zenbook UX425
MOST READ
DepEd: Opening of classes moved to October 5
Palace: Metro Manila shifting to MGCQ a ‘remote possibility’
Sharon Cuneta assures KC that she’s not alone, explains why Gabby Concepcion remains ‘blocked’ from her Instagram page
PLDT assures probe on contractors disconnecting Fibr customers for new applicants
Don't miss out on the latest news and information.

FDA assures no shortcuts in approval of COVID-19 vaccine