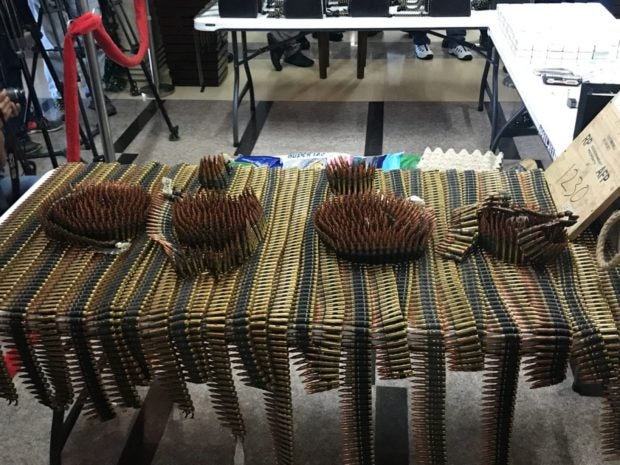 Hundreds of rounds of ammunition seized from two alleged illegal arms dealers are displayed on a table on Dec. 17, 2018. INQUIRER.NET / CATHRINE GONZALES

MANILA, Philippines — The Armed Forces of the Philippines (AFP) has launched an investigation on how firearms and ammunition believed to be owned by the government ended up with suspected arms suppliers of rebel groups in Mindanao.

Two gunrunners identified as Edgardo and Rosemarie Medel were arrested last Sunday after accepting marked money from undercover agents. The firearms and ammunition seized from the suspects were worth P1.2 million.

The wooden containers of the firearms and ammunition bore the labels “AFP,” “GOVERNMENT PROPERTY,” and “PHILIPPINE ARMY.” They were traced to have come from the Army’s 7th Infantry Division in Fort Magsaysay, Nueva Ecija.

“While we can already confirm that the captured firearms are not in our inventory, only a thorough inventory of our ammunition stocks will confirm whether there are losses in our stocks that could have fallen into the hands of gunrunners,” AFP public affairs chief Col. Noel. Detoyato said in a statement on Tuesday.

He added that the AFP conducts “periodic inventory and wall-to-wall counting to account for each and every cartridge.”

Despite that, he did not discount the idea that some “unscrupulous individuals” might have evaded the system and spirited ammunition out of their armory.

“Notwithstanding, the AFP will further enhance our strict firearms and ammunition control measures and will treat this case as a valuable lead to weed out corrupt personnel in our ranks,” Detoyato said. /cbb