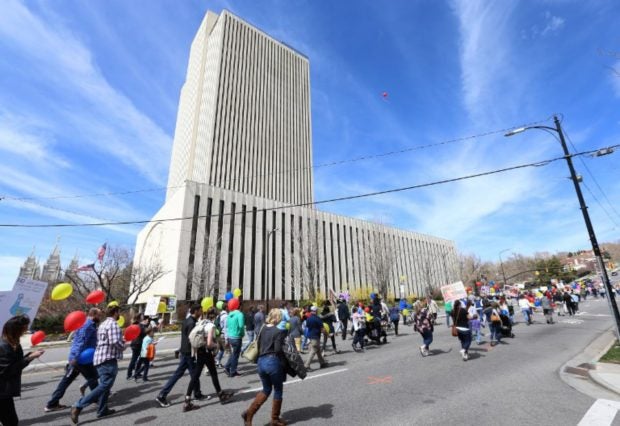 People march by the World Headquarters of the Church of Jesus Christ of Latter-Day Saints in downtown Salt Lake City on March 30, 2018, in Salt Lake City, Utah. AFP

SALT LAKE CITY, Utah, United States — Fewer than half the residents of Salt Lake County belong to the Mormon church, according to new figures that illustrate how Utah’s largest county is becoming more religiously diverse.

Mormons account for 49 percent of the 1.1 million residents in Salt Lake County — the lowest percentage since at least the 1930s, The Salt Lake Tribune reports. That’s according to membership figures provided by The Church of Jesus Christ of Latter-day Saints that include active and non-active members.

Salt Lake County includes Utah’s capital, Salt Lake City, which has long been more religiously diverse. But it also includes suburbs such as West Jordan, Sandy and South Jordan that have traditionally been Mormon hotbeds.

“The place is just becoming much more diverse,” said Pam Perlich, director of demographic research at the University of Utah’s Gardner Policy Institute. “It is not just that data set that is indicating it. There are many data sets showing that.”

Statewide, Mormons account for nearly 62 percent of Utah’s 3.1 million residents. That number is also inching down as the state’s healthy job market attracts non-Mormon newcomers from other places.

The ongoing demographic shift could have widespread impacts, including at the Utah Legislature, where most lawmakers are Mormon. All six members of the state’s congressional delegation belong to the Utah-based faith as well.

The number of people who are devoted Mormons is probably even lower, said independent Mormon researcher Matt Martinich. He estimates about 40 percent of Mormons are active. If that’s true, it would mean only about 24 percent of Salt Lake County residents are active Mormons.

Martinich said the faith has struggled in urban areas.

Worldwide, church membership growth has decreased in recent years, with 2017 being the slowest in 80 years, according to Martinich’s research. The number of convert baptisms in 2017 reached the lowest level in 30 years, he said.

Salt Lake County is now one of five counties in the state where Mormons aren’t the majority, joining Carbon, San Juan, Summit and Grand. The portion of Mormons in Weber County is also nearing that mark, down to 53 percent, the figures show.

Utah County, home to the Mormon-owned Brigham Young University, has the third-highest percentage of Latter-day Saints with 82 percent. Utah County has the second most residents behind Salt Lake County.

Derek Miller, president of the Salt Lake Chamber and former chief of staff for Gov. Gary Herbert, remembers growing up in Provo, where he knew only one kid who wasn’t Mormon.

After living in Washington, D.C., as adult, he returned to Utah and decided to live in Salt Lake City with his wife to raise their children. Miller said about half of his children’s friends are Mormons.