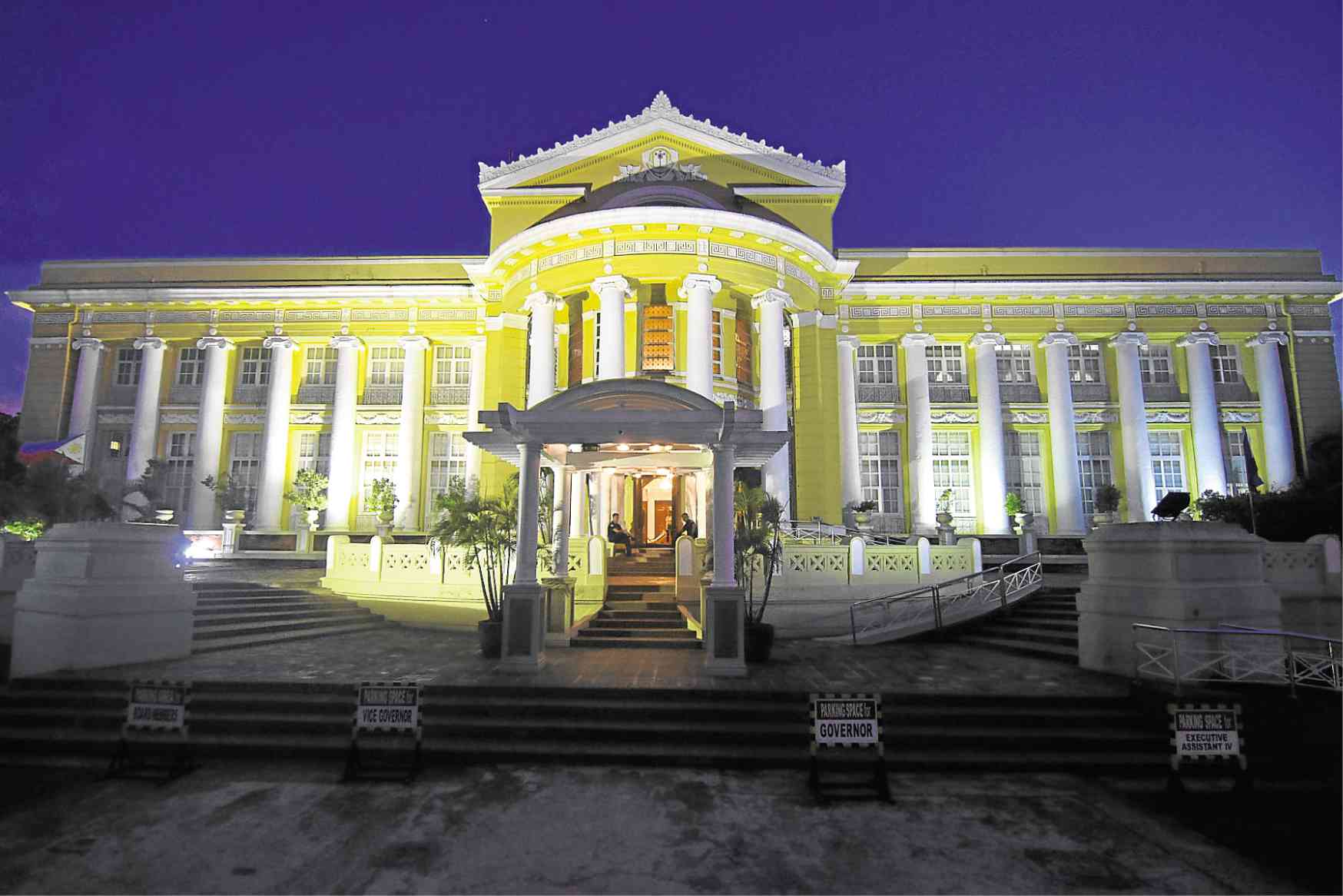 TREASURE The century-old Pangasinan provincial capitol, which has been drawing tourists to the capital town of Lingayen, is one of the country’s architectural treasures recognized by the National Commission for Culture and the Arts and the Filipino Heritage Festival Inc. —PHOTOS BY WILLIE LOMIBAO

LINGAYEN, Pangsinan — The provincial capitol, which survived heavy bombardment during World War II and the magnitude 7.7 earthquake that devastated northern Luzon in 1990, officially turns a century old this month.

With its typical American neoclassical architectural design, the capitol was declared one of the country’s eight architectural treasures by the National Commission for Culture and the Arts and the Filipino Heritage Festival Inc.

It is not clear when it was officially completed in December 1918, but the building itself has been unchanged, based on available photographs.

Only the layout of its interiors evolved through the years to make it more functional, according to Maria Luisa Elduayan, provincial tourism and cultural office head. 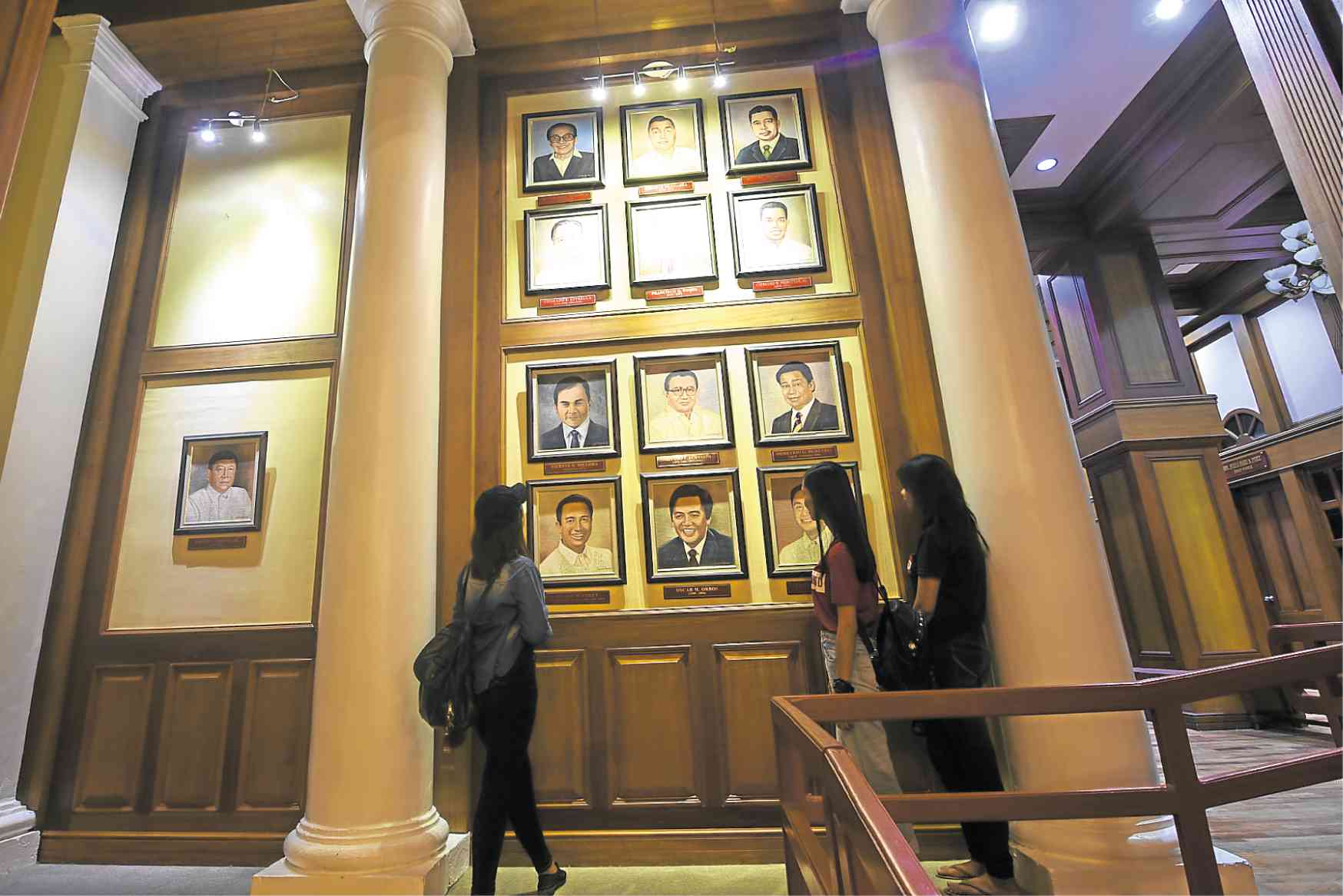 WALL OF LEADERS A wall at the capitol features a gallery of officials who oversaw the development of Pangasinan.

The capitol stands as an icon of the provincial government’s commitment to build heritage. It was declared a heritage site through an ordinance approved on Nov. 12.

The idea of building a new capitol came about during the first decade of the American occupation in the 1900s.

At the time, the seat of the provincial government was Casa Real (Royal House), a Spanish-designed structure built in 1885 just a block from a Catholic church.

But provincial officials decided to move from that building due to the exorbitant maintenance cost and the small space, according to H.F. Cameron, a member of the American Society of Civil Engineers and Philippine Society of Engineers, in his article that was published in the January 1914 issue of the Bureau of Public Works (BPW) Quarterly Bulletin.

“Considerable repair work has been done in the past due to the destructive work of white ants and dry rot,” Cameron said.

In 1901 and 1902, Pangasinan spent P3,500 to repair the office of the provincial supervisor, while P36,478.65 was spent to make the building safe for occupancy from 1906 to 1912, wrote Cameron, who lamented the “reconstruction expenses of practically P40,000 on a building that, from the most authentic sources available, cost only P30,000 to construct.” SYMBOL Visitors are greeted by the seal of Pangasinan set on the capitol lobby’s hardwood floor.

In 1911, a committee composed of provincial board members and the district engineer decided to plan for the construction of a new provincial government center as soon as sufficient funds were available.

They aspired for a center that included the capitol, a court house, an executive building, a jail house, a garage, a hospital and residences for the provincial governor and the provincial treasurer, BPW district engineer Sotero Baluyut said in the Oct. 1, 1918, issue of the BPW bulletin.

Baluyut described the government center as “the most elaborate yet planned” because all the buildings would be made of reinforced concrete and would cost the province about P1 million.

But due to budget limitations, it was decided to build the capitol first, he said.

On Nov. 12, 1912, the provincial government under the administration of Gov. Juan Alvear bought a 29.2-hectare lot along the Lingayen Gulf from Edgar Smithers.

The provincial government appropriated P360,000 for the building, Baluyut said, but ended up spending P370,000 for its construction and P108,000 for its labor by the time it was completed.

This made the capitol “the costliest and most pretentious structure of its kind in the archipelago.” It was designed by Ralph Harrington Doane, an American consulting architect.

Work on the capitol began on April 17, 1917, almost five years after the lot was bought.

“First class” materials were used in the construction of the building, among them 761.88 cubic meters of hardwood such as narra, “yakal,” apitong, redwood, lauan, molave and lumbayao, Baluyut said.

A total of 8,104 barrels of cement and 4,830 cu m of crushed stones were poured into the structure, and about 1.1 million kilograms of reinforced steel were used. 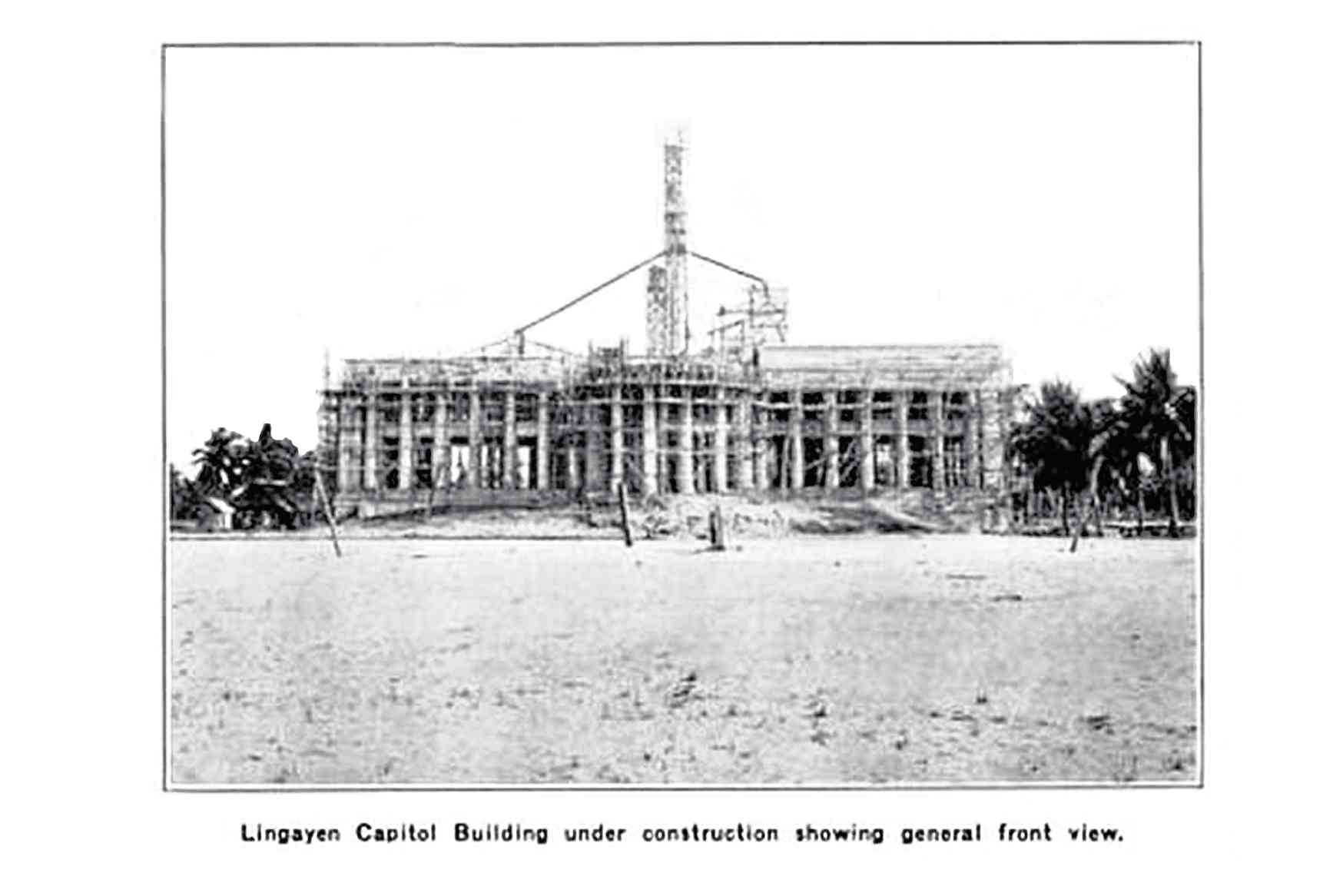 CAPITOL RISING A photograph published in the April 1, 1918, edition of the Bureau of Public Works Quarterly Bulletin shows the Pangasinan capitol while under construction.

Some of the materials had to be hauled from what was then the town of Dagupan to Lingayen using two road rollers with 26 wagons, as well as 30 bull carts, according to Baluyut’s account.

Four flat-bottomed boats were also used to transport crushed rocks from the quarry at Labrador town to the construction site.

Baluyut said a Filipino assistant engineer supervised the technical aspects of the construction, which was overseen by an American foreman.

“There were 145 Filipino carpenters and one Spanish mason for the stucco finish. The Spaniard stayed only about two weeks to start this work, which was continued by Filipino skilled masons who readily learned to do this kind of work,” he said.

The building was designed to supply “ample, attractive, well lighted and ventilated offices for the various officials,” Baluyut said.

“This was obtained first by the large window openings and by designing the interior in large open spaces, interior walls being omitted so far as possible. This gives the building the appearance of a large open pavilion,” he said.

He said the windows throughout the structure were made of concha shell with narra frames, protected by wrought iron grills.

Crystalline limestone from Alaminos town that resembled the Italian marble Botticino was used for the exterior finish, an improvement over the “dull, dead, gray so characteristic of the previously constructed concrete buildings throughout the islands,” he said.

Today, the capitol’s ground floor has been converted into the offices for 14 provincial board members. The second floor, which is accessed by a long staircase, is where the offices of the governor and vice governor and the session hall are located.

History of harvest, Heritage of health