‘Inquirer Photo Exhibit’ on its last day on Dec. 16 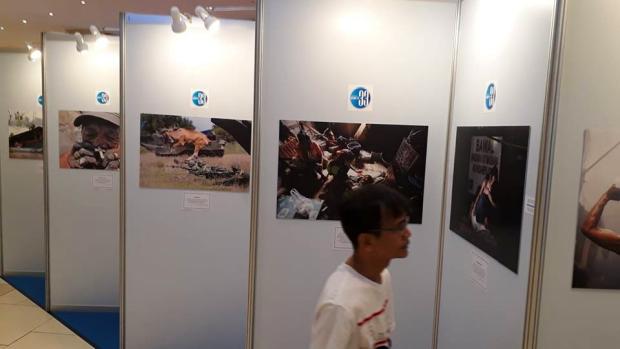 For 33 years, the Philippine Daily Inquirer had been witness to some of the most crucial turning points and most compelling milestones in Philippine history.

And the storyteller that it is, the Inquirer has proven to be more than adept in fearlessly penning stories that have toppled governments, exposed controversies, championed advocacies, and spread news of triumphs and achievements that have helped boost the Filipino morale.

Alongside these stories are some powerful images — snapshots of Philippine history, of which the Inquirer has unwittingly become a part.

Inquirer has indeed chronicled some of the most tumultous and exciting times in history: from the time former President Ferdinand Marcos fled the country amid the People Power Revolution of February 1986; when former President Joseph Estrada, who called for an ad boycott against the Inquirer in 1999, was ousted in a military-backed civilian revolt; when Pope John Paul II visited the Philippines in January 1995; when former President Corazon Aquino died on Aug. 1, 2009; when the P10 billion pork barrel scam was exposed in July 2013.

Today, the Inquirer remains just as vigilant and committed in delivering balanced news and fearless views, as it was when it printed its first issue in Dec. 9, 1985.

And as it marks its 33rd year, the Inquirer looks back on some of these historic moments through the “Inquirer Photo Exhibit,” which opened at the Uptown Place Mall in Fort Bonifacio in Taguig last Friday, Dec. 14.

The exhibit — which will be open until 10 p.m. Sunday, Dec. 16 — is a showcase of powerful images captured by Inquirer photographers, and of some of Inquirer’s historic page one covers over the last three decades.