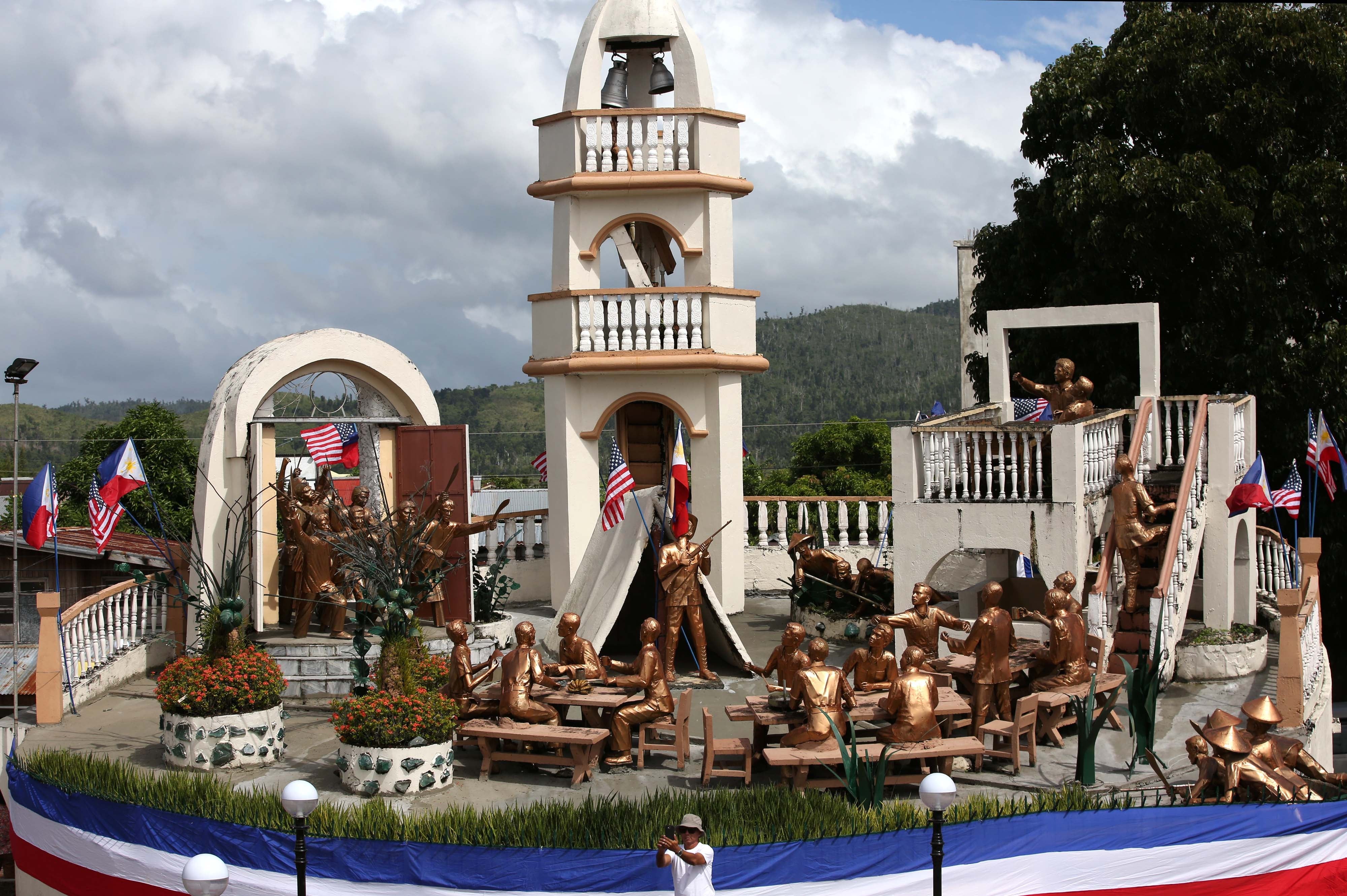 TOWN’S PRIDE A visitor takes a selfie at the Balangiga Encounter Monument, a life-size tableau in Balangiga, Eastern Samar, depicting the local uprising against American colonial rule in 1901. It has become a popular attraction since the return of the town’s historic bells to the country on Dec. 11. —LYN RILLON

President Rodrigo Duterte has acknowledged that the return of the Balangiga bells “[was] upon the demand of the Filipino people.”

“Let me be very clear on this here and now. The credit (for) the return of the Balangiga (bells) does not belong to any worker or officials of government,” the President said, contradicting his spokesperson Salvador Panelo who earlier said that the bells’ journey back to the country after 117 years was due to Mr. Duterte’s “political will.”

“Nobody, but nobody, should ever claim success for (their return),” the President said on Thursday, stressing that the bells were the property of the Catholic Church.

The bells were taken by American troops as war trophies in retaliation against the people of Balangiga, Eastern Samar, for the Sept. 28, 1901 attack on a US garrison that killed 48 soldiers.  One of the bells was used to signal the attack, according to historian Rolando Borrinaga.

US officials formally turned over the three bells to the Philippines on Tuesday in Manila. The bells arrived in Balangiga on Friday amid cheering residents.

The President said he would skip the High Mass today celebrating the bells’ return and just ceremonially receive the artifacts from US government representatives. He would then  turn over the bells to “the people of Balangiga and the priest there,” he said.

“I don’t want to hear Mass.  I have heard all the Masses in the world,” the President added. 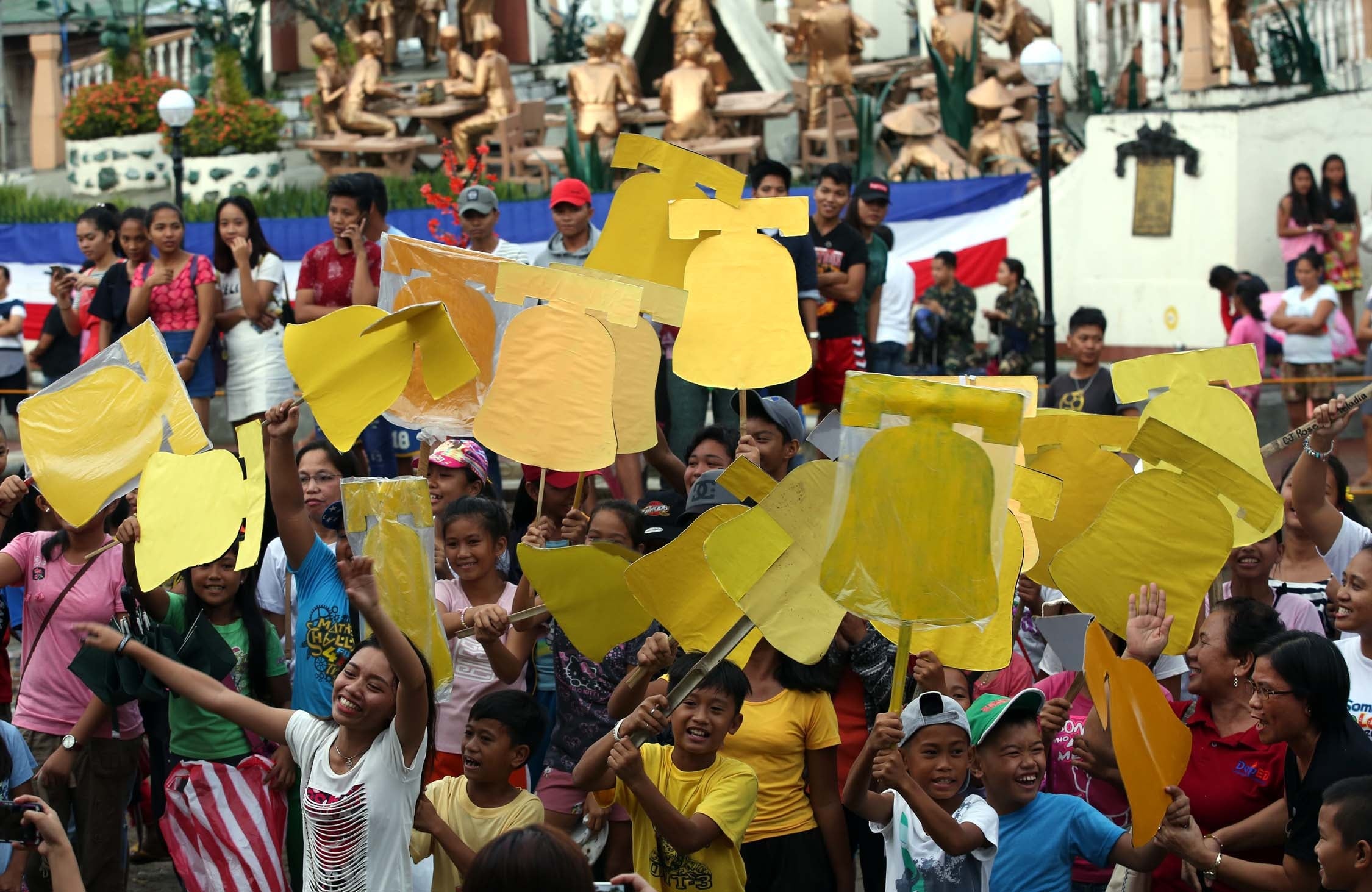 RINGING WELCOME Schoolchildren in Balangiga wave paper cutouts of church bells to welcome the return of the historic Balangiga bells to their town on Friday. The bells were taken as war booty by American troops in 1901 to avenge the death of 48 US soldiers killed in a local uprising. —LYN RILLON

Amid the festive atmosphere, security is expected to be tight at the Balangiga rites where other dignitaries are expected, including Papal Nuncio Archbishop Gabriele Caccia; Archbishop Romulo Valles, the president of the Catholic Bishops’ Conference of the Philippines; and Archbishop Timothy Broglio of the US military ordinariate.

White and yellow banners — the Vatican’s colors — draped the public gymnasium at the town plaza for the turnover rites, a reminder that the event was a Church and not a state affair.

A street parade of students from local public schools was scheduled before today’s 3 p.m. turnover rites, after which the High Mass would be  celebrated by Bishop Crispin Varquez of the Borongan Diocese, assisted by Bishops Leonardo Medroso and Rex Ramirez.

“These bells are a symbol of the gallantry of our ancestors,” said Fara Diva Duran Gamalo, who traces her ancestry to the Durans, who were among the townsfolk who fought in the 1901 uprising.

The three bells will be temporarily put on display outside St. Lawrence Church, before they are permanently installed inside the church’s old belfry.

In Malacanang, Panelo said that President Duterte’s remarks declining credit for the return of the bells was further proof of his “humility” in public service.

“The recent remarks of the President… highlights the style of the Chief Executive: action-oriented and no-frills public service marked by humility,” the presidential spokesperson said. 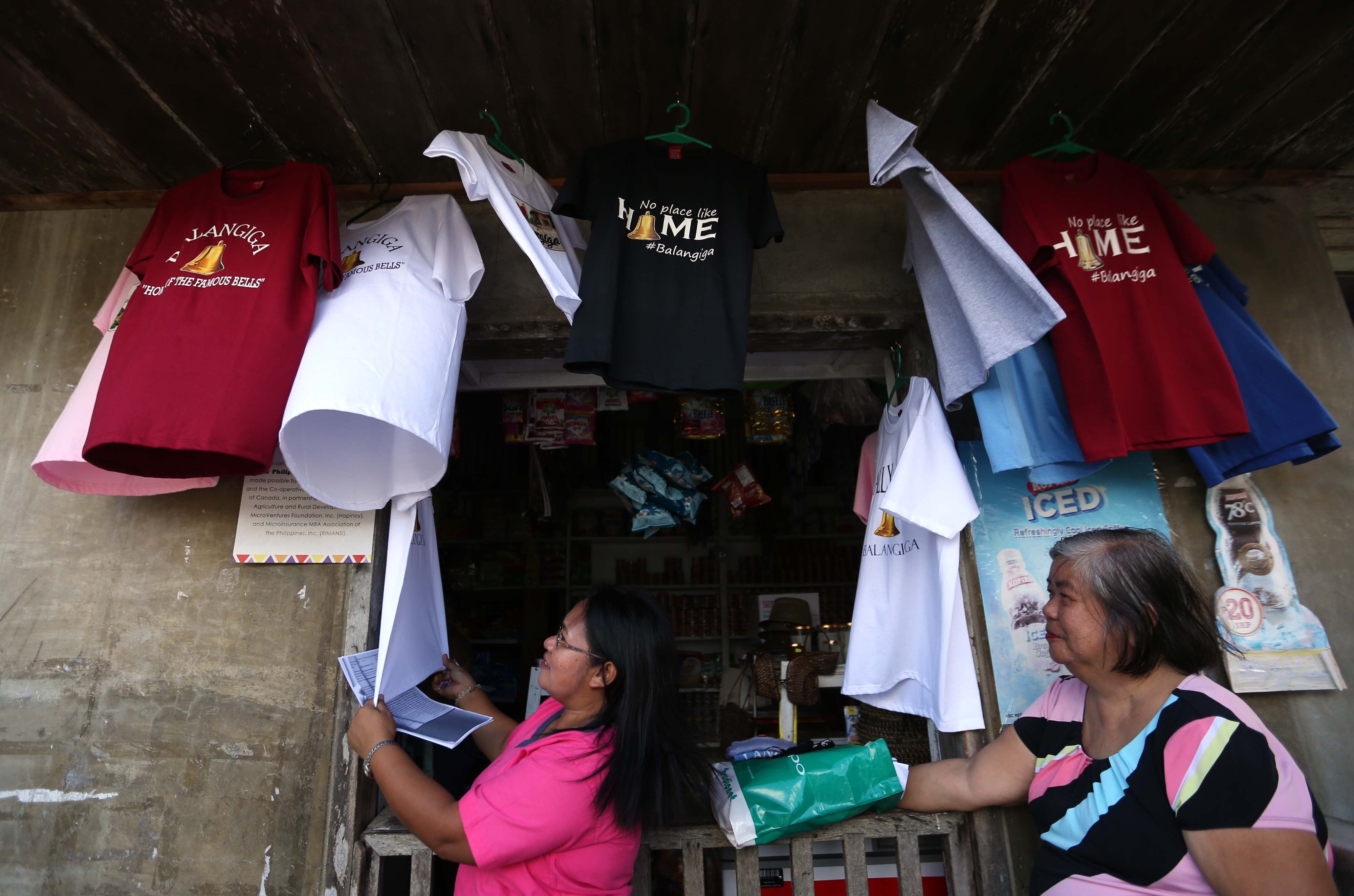 DRESSED FOR THE OCCASION When tourists come, can souvenirs be far behind? Visitors who flocked to Balangiga to witness the return of its iconic bells take time out to shop for commemorative shirts in a neighborhood store. — LYN RILLON

Panelo added: “The President’s statement also shows his sincerity in upholding sovereignty through the use of diplomacy as a leverage to achieve what the country rightly and truly deserves.”

Asked if the President had changed his mind about visiting the United States now that the bells are back in the country, Panelo said: “I talked to him about it and he said, “It’s so cold there. I really can’t stand the cold.’ He has not said he is going, but he’s considering. He’s still studying it.” —WITH REPORTS FROM JOEY GABIETA AND JULIE M. AURELIO