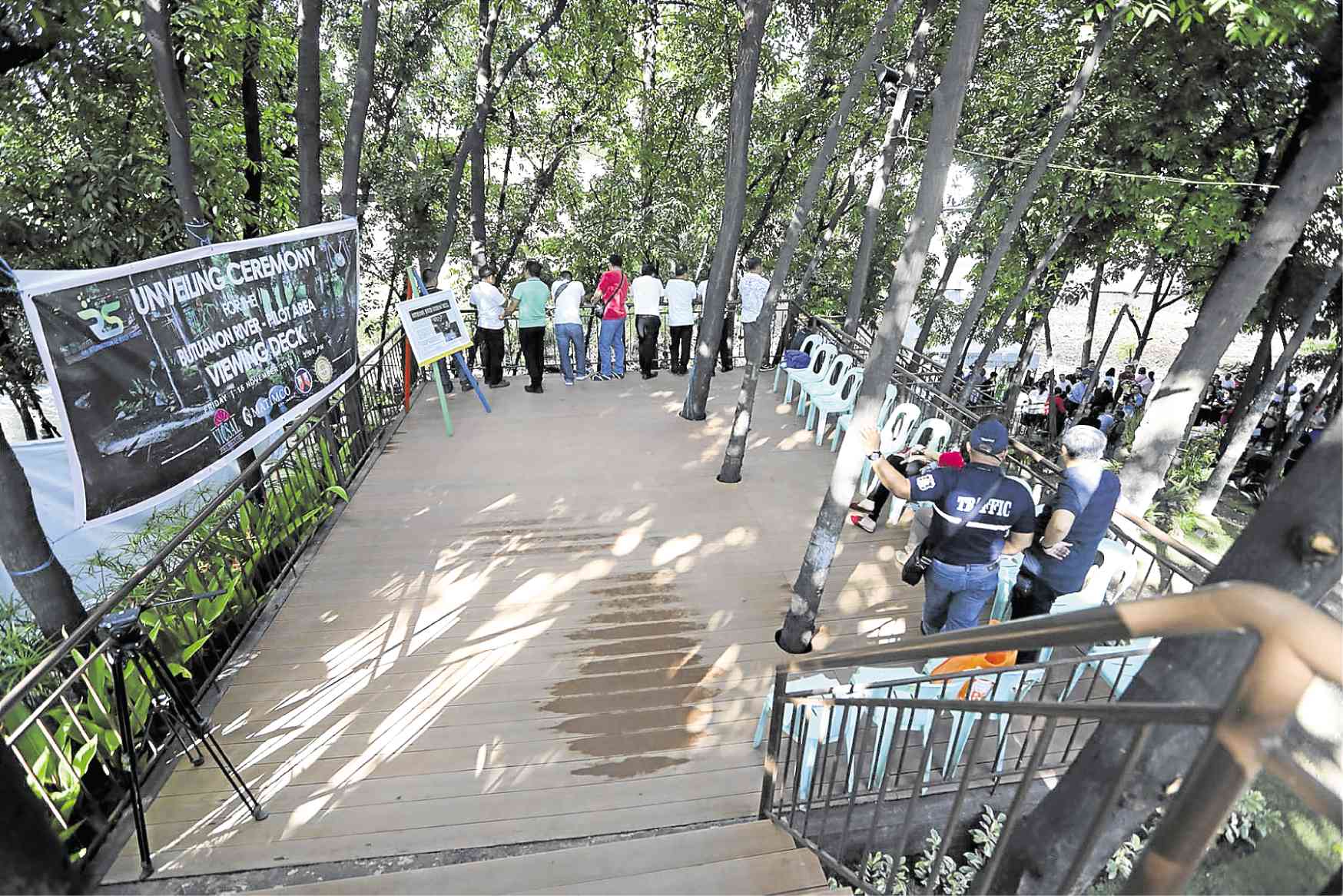 RIVER VIEW The Mandaue City government built a viewing deck as part of rehabilitation of the Butuanon River and cleanup of its banks. —TONEE DESPOJO/CEBU DAILY NEWS

MANDAUE CITY — When he was 7 years old, Solomon Cuizon and his friends would swim in the clean waters of the Butuanon River and play on its banks.

They did the laundry and took a bath in a reservoir nearby.

Now 40, Cuizon said he felt bad that the younger generations of Mandauehanons might no longer experience what they had before.

The Butuanon River has deteriorated badly over time due to pollution. In one instance, it was declared biologically dead.

City government officials have been struggling to revive it.

The 23-kilometer river has become a casualty of growing urbanization, particularly in Mandaue, whose rapid growth exacted its toll on the waterway.

According to Araceli Barlam, acting chief of the Mandaue City Environment and Natural Resources Office, 62 factories and business establishments discharge effluents into the river, which winds through to 11 barangays in the city from the upland villages of Cebu City before reaching the Mactan Channel.

While discharging is not a problem, Barlam said many companies have violated regulations set by the Department of Environment and Natural Resources (DENR), including the failure to secure environmental compliance certificates from the DENR’s Environmental Management Board (EMB).

“The wastewater should not smell and people should not find it dirty,” she said.

Mayor Gabriel Luis Quisumbing said the city had already met with the violators and had been working with the DENR to make sure that their waste management, especially their sewage and septage systems, “are up to standards.”

“As it turns out, less than 50 percent [of the dirty water] comes from the industrial establishments … The large part of it comes from the households,” Fortuna said.

Any household activity, such as doing laundry, washing dishes and even taking a bath could bring wastewater to the river, he pointed out.

Mandaue’s drainage system is connected to the river all the way down to the sea.

In 1995, the city council passed a resolution penalizing those caught dumping toxic wastes directly into the Butuanon. Back then, the river was already described as “highly polluted by industrial and domestic waste.” 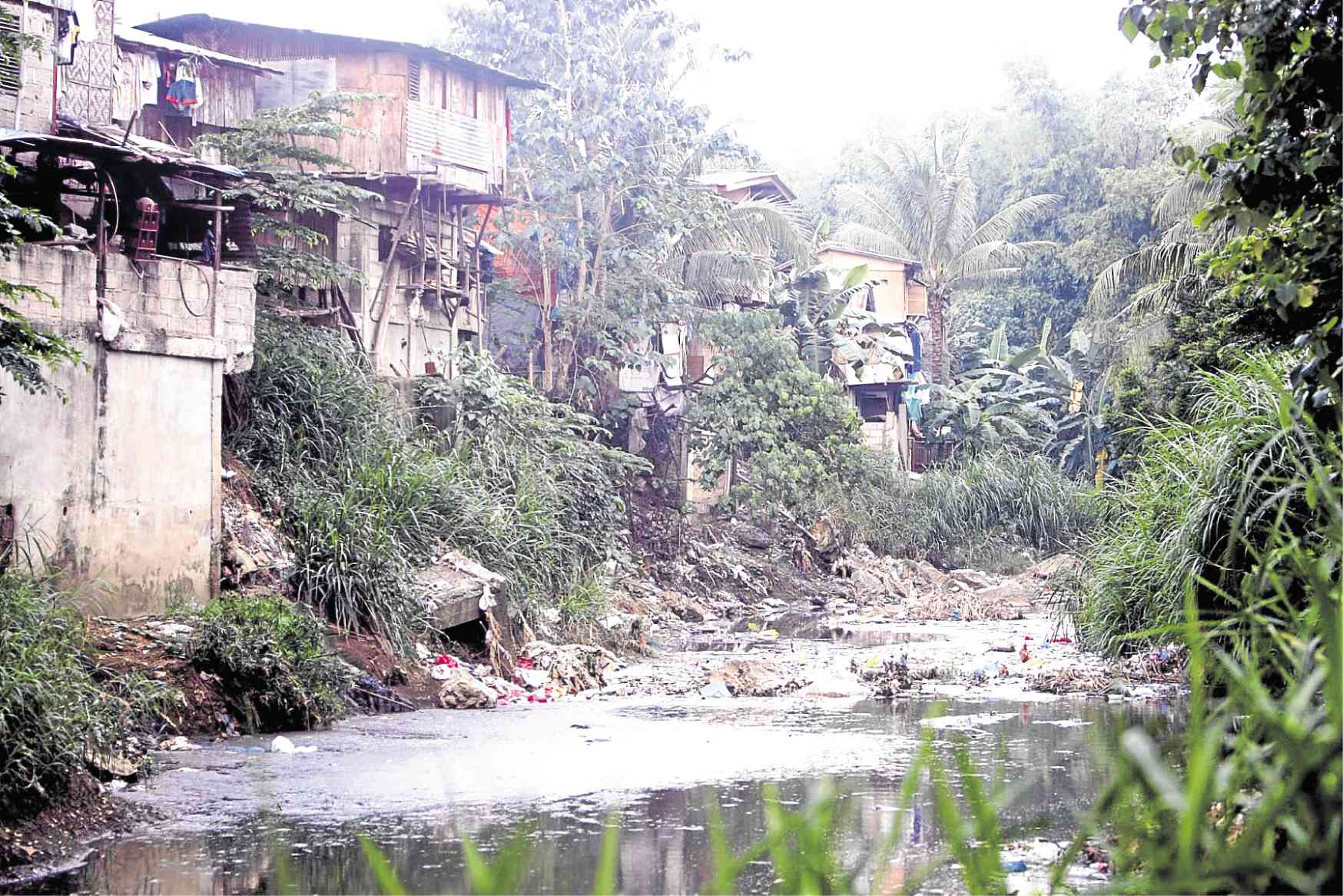 An interagency committee was formed to oversee the Butuanon River Watershed Management Project, but nothing came out of it.

Quisumbing, who was elected mayor in 2016, revitalized efforts to save the river.

The city government has focused the rehabilitation on a 1.06-km stretch along Barangays Ibabao-Estancia, Alang-alang and Paknaan, during the first phase of the project.

It spent P104 million for the river drainage master plan, at least P70 million in infrastructure projects and another P5 million for a bamboo walk.

Barlam introduced “bioremediation,” which utilizes natural methods to decontaminate the water by planting about 6,000 “umbrella” plants (Cyperus alternifolius) on the riverbanks.

Umbrella plants can absorb heavy metals and help decontaminate toxic chemicals that are discharged into the river, a study conducted by chemistry students of University of San Carlos, a project partner, showed.

A team from the city’s Housing and Development Office also demolished illegal structures that encroached on the 3-meter easement zone from the river.

The Department of Public Works and Highways built a slope protection barrier to prevent soil along the waterway from eroding and check overflows from the creek.

The city’s Department of General Services led the beautification of the riverbank and the construction of pathways.

Barlam said the residents from nearby villages were asked to get involved in the rehabilitation. “Cleanliness should be everybody’s concern,” he said.

“We are willing to put a significant amount of our resources …. [W]e will be able to get support from other agencies,” Quisumbing said.

On Nov. 16, a P1.5-million viewing deck in Barangay Ibabao-Estancia was inaugurated. Its construction was funded by private entities.

“We’ve been humbled by the response of both the private and public sectors,” Quisumbing said. “Hopefully, the spirit of volunteerism is sustained until we are able to fully rehabilitate Butuanon River.”

“There is no stronger legacy we can leave to the future generations of Mandauehanons and Cebuanos than a healthy, vibrant Butuanon River,” the mayor said.