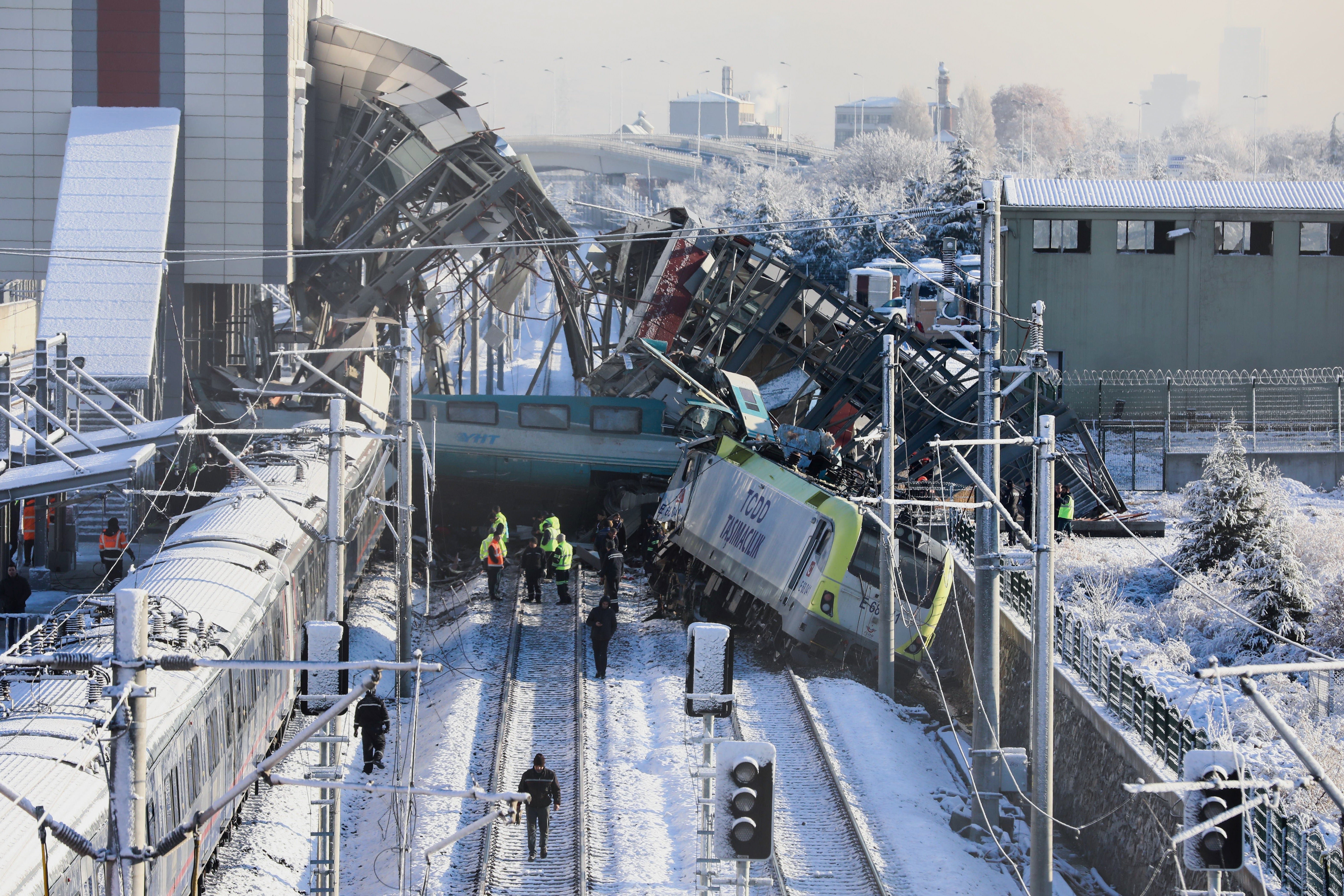 Firefighters and medics try to rescue victims after a high-speed train crashed into a locomotive in Ankara, on December 13, 2018. – Nine people were killed and nearly 50 injured in this train accident. (Photo by ADEM ALTAN / AFP)

ANKARA — Nine people were killed and nearly 50 injured after a high-speed train crashed into a locomotive in the Turkish capital on Thursday, officials said.

Transport Minister Cahit Turhan told reporters in televised remarks that three of those killed were operators of the train.

One of the victims died in hospital, he added.

Turhan added that 47 people were injured and were in hospital for treatment.

The fast train had been on its way from Ankara’s main station to the central province of Konya and according to Hurriyet daily, there were 206 passengers on board.

Earlier, the Ankara governor’s office said three of the 46 people had been seriously injured.

Debris scattered on the tracks

“This morning there was an accident after the 6.30 high-speed train to Konya hit a locomotive tasked with checking rails on the same route,” Sahin told reporters in televised remarks.

Turhan said the accident took place six minutes after the train left Ankara as it entered the Marsandiz station.

The governor said search and rescue efforts continued as “technical investigations” were underway to find out exactly what caused the crash in Yenimahalle district.

He said information about the cause of the crash would be shared with the public when it is known.

Images published by Turkish media showed some wagons had derailed and debris from the train scattered on the rail track, which was covered in snow.

The windows of one wagon were completely broken while another wagon had been smashed after hitting the footbridge, which also collapsed, an AFP correspondent at the scene said.

The Ankara to Konya high-speed route was launched in 2011 and was followed in 2014 with a high-speed link between Ankara and Istanbul.

The accident comes after another rail disaster in July this year when 24 people were killed and hundreds more injured after a train derailed in Tekirdag province, northwest Turkey, due to ground erosion following heavy rains.

Turkey’s rail network has been hit by several fatal accidents in recent years.

In March 2014, a commuter train smashed into a minibus on a railway track in the southern Turkish province of Mersin, which left 10 dead.

In January 2008, nine people were killed when a train derailed in the Kutahya region south of Istanbul because of faulty tracks.

Turkey’s worst rail disaster in recent history was in July 2004 when 41 people were killed and 80 injured after a high-speed train derailed in the northwestern province of Sakarya. /dl/kga