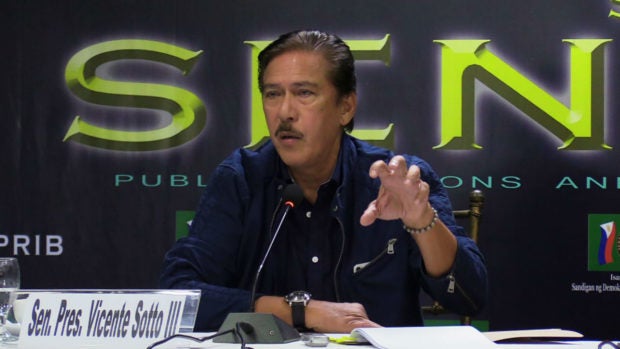 “I wish those against ML in Mindanao to go there and say there what they are saying here,” Sotto said in a text message after Congress overwhelmingly voted Wednesday to approve the martial law extension until December 31, 2019.

“Kahit hindi tumira. Pumunta lang at duon magsalita ng contra nila,” (They don’t need t live there. Just go there and say that they are against it) he added.

Voting 235-28 with one abstention, Congress granted President Rodrigo Duterte’s request to extend martial rule in the South for the third time.

Sotto was among the 12 of 23 senators, who voted for the extension, five were against it, one abstained. Two did not participate while three could not attend the session.

The Senate leader said he was no longer surprised when Senate President Pro Tempore Ralph Recto abstained from voting and when Senator Francis Escudero voted against the extension.

Recto and Escudero belong to the majority block in the Senate.

“I knew what they were going to vote,” Sotto said.

“Ralph wanted six months (extension) lang. Chiz probably has his reasons. The thing is, there is a continuing actual rebellion in Mindanao,” he said.

He later asked Congress for its extension until December of 2017 but requested again to extend it until the end of 2018. /cbb