Actor sues airlines after pinky stuck in armrest during flight 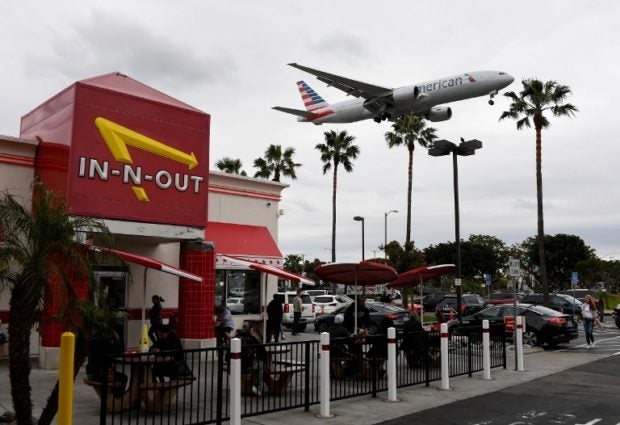 An American Airlines plane flies over a fast food restaurant as it prepares to land at Los Angeles International Airport in Los Angeles, California on March 21, 2017. AFP

LOS ANGELES, United States — A California man has filed a lawsuit against two US airlines after his pinky got stuck in his first-class seat armrest, forcing firefighters and a mechanic to intervene to free the finger.

Stephen Keys, an actor who has starred in “Soul Plane” and “Big Time Rush,” claims in his suit — filed in Los Angeles Superior Court against American Airlines Inc. and SkyWest Airlines Inc. — that he suffered severe emotional distress and weeks of pain after the September 9 incident on board a flight from Reno, Nevada to Los Angeles.

The mishap took place after he raised his armrest to reach for his seatbelt and his pinky got stuck in a small hole under the armrest, according to the suit.

“The spring mechanism embedded inside of this hole in the armrest applied intense pressure to plaintiff’s finger, immediately inflicting injury, swelling and pain,” the suit alleges.

It adds that Keys repeatedly tried to free his pinky as fellow passengers looked on, “causing his dire situation to become a humiliating public spectacle.”

Keys claims he suffered for nearly an hour as flight personnel and firefighters tried to dislodge the finger.

An airline mechanic finally disassembled the armrest and freed the pinky.

The suit says that since the mishap, Keys has been unable to carry out routine tasks, including playing with his children.

American Airlines referred questions on the case to SkyWest, which did not immediately respond to a request for comment. /cbb