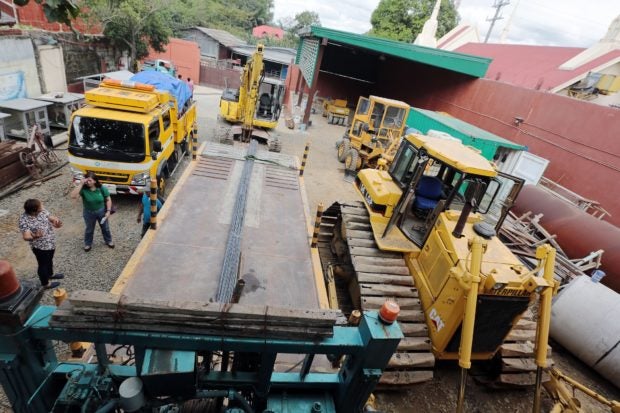 Upping the ante, Andaya moved for the issuance of a subpoena for Consolacion Tubuhan Leoncio, owner of CT Leoncio Construction and Trading, during the plenary session of the House of Representatives.

But the Camarines Sur representative refused to divulge the identities of the Cabinet officials supposedly behind Leoncio’s company.

“This is a single proprietorship operating out of Bulacan. So how come it reached [other regions]? We have received information about a family tree connecting certain officials to these areas,” Andaya told reporters.

“In due time we will release it. We will give you a family tree because many of them are already former husband, former wife. Their last names are already different,” he added.

Pressed to provide more details, the House majority leader said: “They could actually be Cabinet members.”

In a privilege speech on the House floor on Monday, Andaya disclosed that CT Leoncio had been awarded by the Department of Budget and Management (DBM) with government contracts even before Congress could agree on the P3.8-trillion proposed national budget for 2019.

“In line with the investigation of the (House) rules committee on the effects of cash-based budgeting, a large-scale scam has been discovered,” Andaya said.

His disclosure came three days after Malacañang said the House leadership should explain pork barrel realignments worth billions of pesos it had made to the spending bill.

Malacañang on Tuesday said Andaya’s disclosure was just “an allegation.”

He did not say, however, whether the Palace would investigate.

Andaya clarified on Tuesday that he did not accuse Malacañang of being behind Leoncio’s operations, but only a “DBM official,” whom he refused to identify.

But Andaya was apparently referring to Budget Secretary Benjamin Diokno, who faced the House members during Question Hour on Tuesday to explain insertions in the proposed budget for 2019 and billions of pesos unspent by the Duterte administration.

According to Suarez, Sorsogon Vice Gov. Ester Hamor, who is running for mayor of Sorsogon City in next year’s midterm elections, and her husband, Mayor Edwin Hamor of Casiguran town, had apparently benefited from infrastructure projects given to their jurisdictions.

Surprisingly, he said, all the projects were awarded to CT Leoncio.

Suarez said the son of the Hamors was married to Diokno’s daughter, Charlotte Justine.

A visibly irked Diokno tried to avoid answering Suarez’s questions, telling the House minority leader that his questions were unrelated to the subject of the proceedings.

“Did your daughter try to seek your assistance [to help her parents-in-law]? Did you discuss these projects with your family?” Suarez asked Diokno.

When the budget chief said no to his questions, Suarez retorted: “Do you really expect us to believe you? Lucky for you there’s no lightning here.”

Andaya said he believed President Duterte was not aware of the transactions.

“Nowhere in my privilege speech did I tag Malacañang as being involved in the grant of infrastructure contracts,” Andaya said.

“The Office of the President cannot have a favored contractor because it is not a procuring entity,” he said.

Andaya said the family tree showing the connections of Cabinet members to the construction company would explain why CT Leoncio was able to also corner multimillion-peso projects in Metro Manila and other provinces “in almost all parts of the country.”

‘Tip of the iceberg’

“Apparently, what I divulged in my privilege speech was only the tip of the iceberg. We have received official records showing that billions of pesos in public funds were funneled from [the] DBM to CT Leoncio in official transactions of unparalleled proportions,” he said.

Gloria Areniego, CT Leoncio project manager, told the Inquirer in Santa Maria, Bulacan province, that the company bid for only two projects but had yet to be awarded the contracts.

One project was a replacement for San Aurelio Bridge in Balungao, Pangasinan province, Areniego said, without giving details.

She also did not name the other project, but said her company would need to go through a postqualification process for the assessment of its legal, technical and financial capabilities.

Disputing Andaya’s claim that CT Leoncio had been awarded the contracts even before Congress could approve the 2019 spending bill, Areniego said the Department of Public Works and Highways (DPWH) held the biddings early to hasten project completion but that it could not proceed to award the contracts without budgetary support.

She said a circular issued by the DBM in 2010 allowed agencies to start the procurement process pending congressional approval of the budget or receipt of allocations from the DBM. —WITH REPORTS FROM JULIE M. AURELIO AND CARMELA REYES-ESTROPE