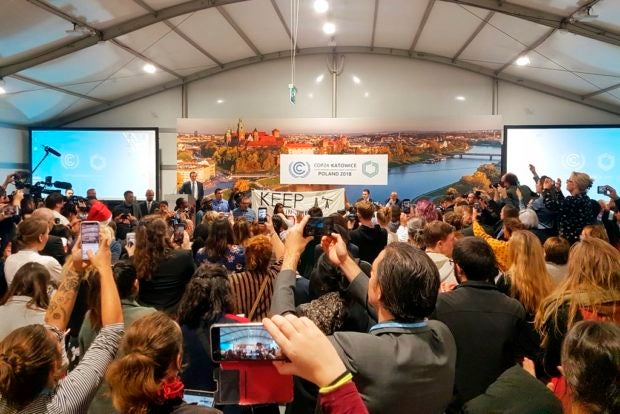 KATOWICE, Poland — An unapologetic pitch by the Trump administration for the continued use of fossil fuels during the UN climate talks here was disrupted by mocking laughter and protest against US energy policy.

Chants of “Keep it in the ground!” and “Shame on you!” erupted in the room during a presentation on Monday by a panel led by Wells Griffith, White House adviser on international energy and environment.

Over the weekend, the United States, Russia, Saudi Arabia and Kuwait prevented endorsement of a scientific report on keeping global warming below 1.5 degrees Celsius — the most ambitious target in the 2015 Paris climate accord.

The Intergovernmental Panel on Climate Change (IPCC) had warned of catastrophic disasters in just 12 years if carbon emissions were not radically slashed.

Griffith’s panel, which discussed so-called US innovative technologies, struck a discordant note in the climate talks, which had been centered on moving away from fossil fuels, the main source of emissions that cause global warming.

Griffith said all energy sources, including coal, oil and gas, would be “utilized unapologetically.”

“If we are serious about eradicating poverty and providing universal access to reliable and affordable energy, it is clear that energy innovation and fossil fuels will continue to play a leading role,” he said.

Minutes into his opening speech, the White House official was interrupted by mocking laughter from the audience.

One protester stood up, saying Washington’s “false solutions” were “not funny” and called the panel “fossil fools.”

Another protester, Jose Bravo of the Just Transition Alliance, said their communities were living under the disastrous impact of climate change.

“Our air and water are being poisoned by fossil fuel extraction, our livelihoods are threatened by floods and drought, our communities are the hardest hit and the least protected in extreme weather events,” he said.

“For the United States, the policy is not to keep it in the ground, but to use it in a way that is clean and efficient,” Griffith said after the protesters left.

There was little talk of global warming and climate change, but there were discussions of economic growth and processes that would be “commercially viable.”

Kristy Drutman of the youth group SustainUS said in an interview that it was disgusting to hear government officials putting profit above people.

“You can’t be valuing our economy over the environment, because without our natural resources, our economy cannot keep functioning,” she said. “They view us as just externalities of an economic process that they view as inevitable. That is ludicrous.”

The United States had been backsliding in climate leadership since Trump took office in 2017.

This was underscored when the business magnate-turned-politician became the sole leader from the Group of 20 who did not sign the group’s climate change statement, released just a few days before the climate talks in Poland.

The panel discussion is an indication of what to expect from the United States and other rich countries at the high-level talks this week when delegates from nearly 200 countries race against time to iron out the rule book for the Paris Agreement.

Scientists and civil society groups have expressed alarm over the actions of developed countries, particularly regarding climate science and finance.

Rodne Galicha, country manager of Climate Reality Project Philippines, expressed hope that the report would still be fully welcomed by all countries in the UN Framework Convention on Climate Change, as high-level officials meet this week.

“All actions must be based on science … [The IPCC report] will be the very basis of our climate action and of higher ambition,” he said. —With a report from AP