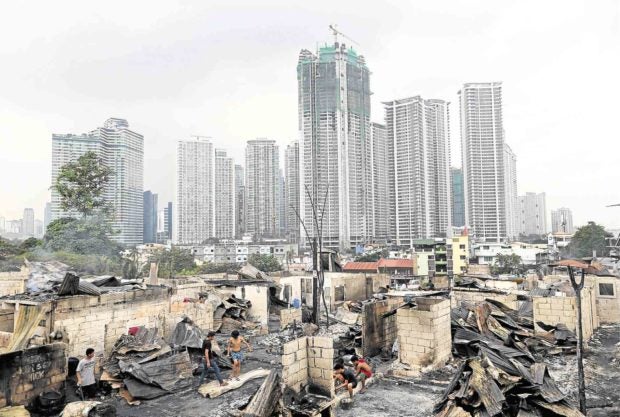 GROUND ZERO Residents look for anything they can salvage from their houses after a fire razed an informal settlers community at Laperal Compound in Makati City on Tuesday. —LYN RILLON

Around 450 families were displaced when a fire broke out in an informal settlers’ community near Edsa in Makati City on Tuesday, just seven years after a big blaze razed the area, making it unsafe for residents.

Authorities said that over 1,600 people from Laperal Compound sought shelter at Nuestra Señora de Gracia Church after they lost their houses in the fire that started at 1:14 a.m.

The Makati fire marshal, Supt. Roy Quisto, reported that three persons were injured as they fled from their burning houses.

Quisto said the fire started in the room of Angelica Padilla, one of the tenants in an apartment.

It lasted more than three hours and reached Task Force Bravo before it was declared under control at 4:20 a.m. The blaze was finally put out at 5:26 a.m.

The fire destroyed around 300 houses on Bernardino and Romero Streets with the damage to property estimated at around P10 million.

On April 19, 2011, some 2,500 families were left homeless after a fire which reached the general alarm — the highest fire alert level—razed 90 percent of Laperal Compound.

Then Mayor Junjun Binay declared the area a “danger zone” and ordered police and barangay officials to stop residents from returning.