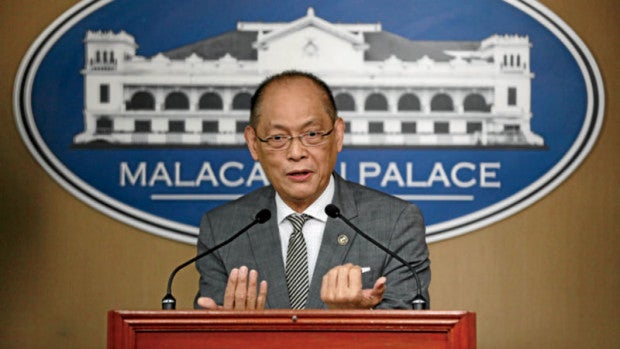 But Diokno clarified it should not be called “insertions” because “it’s part of the budget process.”

“We want infrastructure to be higher, we decided to augment, to add to the P480.2 billion (budget of the Department of Public Works and Highways) another P75 billion,” he explained during the “question hour” conducted by the House of Representatives.

House Majority Leader Rolando Andaya Jr. said: “It’s clear now the insertions is not P51 (billion) but P75 (billion). Thank you very much for admitting. P75 billion in public funds in which Public Works (Department) doesn’t have an idea where it came from.”

Diokno admitted that his daughter was married to the son of incumbent Sorsogon Vice Governor Ester Hamor, who is running for the mayoral seat in Sorsogon City in 2019.

Diokno responded to Suarez’s insinuations, saying: “I’m not aware of that, it’s not part of your question.”

“Let me tell you, your honors, I’ve served three presidents, I’m known for my integrity.

“I have no relatives, no friends, as far as the public affairs is concerned. That’s my reputation, that’s why they call me Dr. No,” Diokno added. “So I don’t know what your question is all about.”

Diokno also said his job was to “allocate resources” and not to oversee which projects receive funding.

Diokno also denied allegations that he gave favor to projects in Sorsogon.

“They don’t discuss projects with me, your honor. Bawal po pagusapan ‘yan within our family,” he said.

Buhay Rep. Lito Atienza then came to the defense of Diokno after the latter affirmed there were no “pork barrel” funds in the 2019 budget.

“Mapalad ‘yung distrito ng mga kamaganak ng ating Secretary but I would never accuse him of being biased and providing funds for his relatives, in the same manner, I accept his admission this Congress has not committed any pork barrel violation and therefore Senator Lacson is way off the mark and the allegations in media are not true,” Atienza said. /je