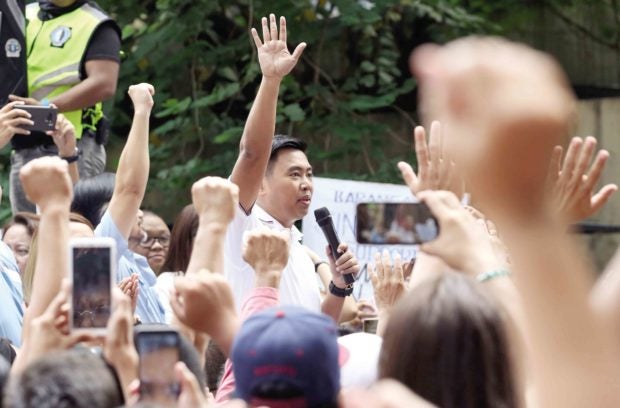 COMEBACK KID Junjun Binay (center) thanks supporters after filing his certificate of candidacy for Makati mayor at the Commission on Elections in October. —JOAN BONDOC

He refused to enter a plea so the Sandiganbayan Third Division entered a not guilty plea for him during his arraignment on Friday. The court set his pretrial on Jan. 18.

Binay Jr. was charged with four counts of graft, six counts of falsification and one count of malversation in connection with the supposedly rigged bidding for the last three phases of the five-phase project.

The six counts of falsification and two of the four counts of graft covered phases 4 to 5 of the city hall project. These were filed in the Sandiganbayan in February 2016.

The rest of the graft charges and the malversation case were related to Binay Jr.’s processing of the payments for obligations incurred by his father, then Vice President Jejomar Binay Sr., for phase 3. The 11-story car park building was a joint project of Binay Sr. and his son.

The older Binay, however, was charged only in July 2016 after he lost his immunity from criminal charges upon finishing his term as vice president.

When he succeeded his father as Makati mayor, Binay Jr. continued to process the payments of P11.01 million and P599.4 million to MANA Architecture and Interior Design Co. and Hilmarc’s Construction Corp., for phase 3 of the project.

He was primarily involved in the awarding of contracts which were worth P649.28 million and P141.65 million.

Phases 1 and and 2 of the project, awarded while Binay Sr. was mayor of the financial business district, cost P387 million and P499.36 million, respectively. The contracts did not involve his son.

In the case they filed in the Sandiganbayan, Ombudsman prosecutors alleged that no public bidding was held for the city hall project despite the multibillion-peso total cost.

The bid invitations and the documents showing the participation of other bidders were forged, they claimed.

Binay Jr. was actually the last of the defendants to be arraigned.

The proceeding was delayed for so long because of his numerous motions contesting the validity of the charges.

He first filed a motion for judicial determination of probable cause questioning if there was sufficient basis to put him on trial. The court denied this on April 18, 2017.

Binay Jr. then filed a motion to quash the case, saying he was charged with different crimes for the same set of allegations while the prosecution failed to state the required elements of valid charges. This was denied on March 26.

Aside from the City Hall case, the Binays were also indicted last March in connection with a similar controversy hounding the P1.35-billion Makati Science High School building. The case is now pending in the Sandiganbayan Fifth Division.

Binay Jr. is running for his old post in next year’s elections, putting him directly in competition with his sister, incumbent Makati Mayor Abby Binay, who is eyeing a second term.

Binay Sr. earlier said that he would prefer to let the voters decide who between his children should win.