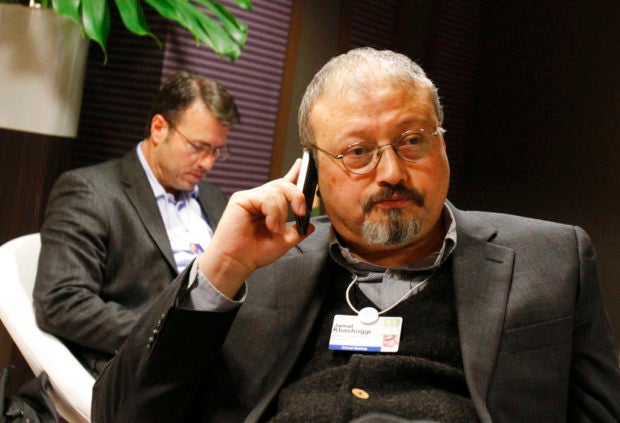 In this Jan. 29, 2011 file photo, Saudi journalist Jamal Khashoggi speaks on his cellphone at the World Economic Forum in Davos, Switzerland. AP

WASHINGTON, United States — Jamal Khashoggi’s final words were “I can’t breathe,” CNN said Sunday, citing a source who has read the transcript of an audio tape of the final moments before the journalist’s murder.

The source told the US network the transcript made clear the killing was premeditated, and suggests several phone calls were made to give briefings on the progress.

CNN said Turkish officials believe those calls were made to top officials in Riyadh.

Khashoggi, a Saudi contributor to The Washington Post, was killed shortly after entering the kingdom’s consulate in Istanbul on October 2.

The transcript of the gruesome recording includes descriptions of Khashoggi struggling against his murderers, CNN said, and references sounds of the dissident journalist’s body “being dismembered by a saw.”

The original transcript was prepared by Turkish intelligence services, and CNN said its source read a translation version and was briefed on the probe into the journalist’s death.

Erdogan has repeatedly called on Saudi Arabia to hand over suspects in the killing. According to Turkey, a 15-member Saudi team was sent to Istanbul to kill Khashoggi.

Saudi Arabia, however, holds that it was a “rogue” operation gone wrong — a claim undercut by the reported transcript.
For his part US President Donald Trump has refrained from blaming Saudi Crown Prince Mohammed Bin Salman, even though the CIA reportedly concluded that he ordered the assassination.

The murder has damaged Riyadh’s international reputation and Western countries including the United States, France and Canada have placed sanctions on nearly 20 Saudi nationals. /cbb