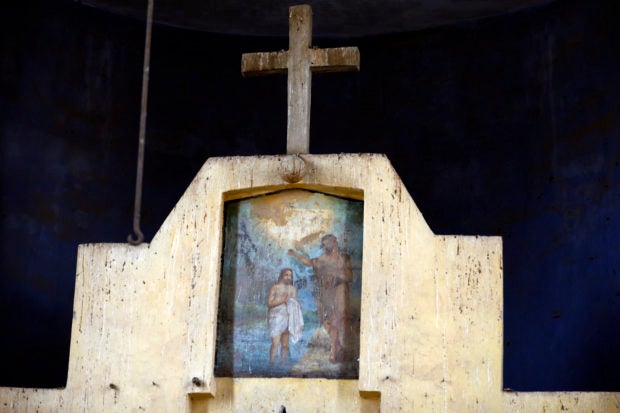 A picture taken on December 9, 2018, shows a fresco painting depicting Jesus’ baptism at an Ethiopian church at Qasr al-Yahud in the occupied West Bank near the Jordan river, which is being opened for the first time in 50 years. AFP

QASR AL-YAHUD, Palestinian Territories — Efforts to clear thousands of landmines and other ordnance around the site where many believe Jesus was baptised have reached a milestone and officials allowed a rare glimpse Sunday of abandoned churches there.

The church grounds around the site in the occupied West Bank have sat empty and decaying for around 50 years, though pilgrims have been able to visit a nearby restricted area at the traditional baptismal spot on the banks of the River Jordan.

Work at the site just north of the Dead Sea is being overseen by Israel’s defense ministry, de-mining charity Halo Trust and Israeli firm 4CI.

According to the ministry, the project covers around one square kilometer (250 acres) as well as some 3,000 mines and other explosive remnants.

The work began in March and would require another eight months to a year to complete, said Moshe Hilman of Israel’s defense ministry.

Mines and other ordnance have been cleared from Ethiopian and Greek Orthodox monastery sites as well as a Franciscan chapel, organizers said.

Other grounds belonging to Russian, Syrian, Romanian and Coptic Orthodox churches are yet to be cleared.

The plan once complete is to return the plots to the various church denominations and allow visits.

At the crumbling, brick-and-concrete Ethiopian monastery on Sunday, a fading fresco of Jesus being baptized by John the Baptist could still be seen inside.

Signs hung on the walls with notifications that the location had been cleared of explosives.

A collection of pieces of mortars and other explosive remnants sat alongside a nearby roadside as a demonstration of some of what had been found.

“The Halo Trust has reached a pivotal point in our work to clear the baptism site of landmines and other remnants of war,” the charity’s CEO James Cowan said in a statement.

He added that “we have completed clearance of the Ethiopian, Greek and Franciscan churches.”

The majority of the mines were laid by Israeli forces after the country seized control of the West Bank in 1967 from Jordanian troops.

Other unexploded ordnance from both Israel and Jordan has remained lodged in the ground, including around the churches, which were evacuated by Israel in the 1970s.

Israel’s control of the West Bank has never been recognized by the international community, which considers the land occupied Palestinian territory. /cbb