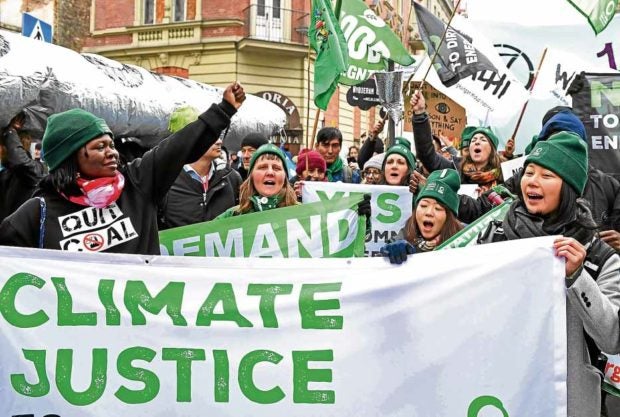 CLIMATE ACTION Carrying signs calling for a stop to the use of coal and fossil fuels, as well as for greater climate action, protesters on Saturday march from Freedom Square to Spodek Arena, where the 24th Conference of the Parties is being held, in Katowice, Poland. —AFP

KATOWICE, Poland — The exclusion of human rights from the draft implementing guidelines of the Paris Agreement would put vulnerable sectors in more peril, rights experts and environmental campaigners have warned.

As negotiators scrambled to wrap up the technical phase of the UN climate talks in its first week, civil society groups sounded the alarm over the explicit removal of human rights from the draft text of the rule book that is seen to breathe life into the landmark climate deal.

Victoria Tauli-Corpuz, the UN special rapporteur on the rights of indigenous peoples, urged all member states of the UN Framework Convention on Climate Change (UNFCCC) to put back all references to human rights, as they iron out the rule book this week.

“Human rights have to be at the center of the agreement,” she said at a press briefing. “Unless it is done, those most affected [by the impacts of climate change] will suffer further.”

Corpuz, a Filipino indigenous activist with Kankana-ey Igorot roots, reminded governments about their obligation to respect human rights, especially as member states under the UN General Assembly that adopted the Universal Declaration of Human Rights exactly 70 years ago today, Dec. 10, 1948.

The Paris accord, which limits the rise of global temperature to 1.5 degrees Celsius, was the first international environmental agreement to refer especially to human rights—a victory also from the civil society groups that lobbied hard for its inclusion.

The preamble states that actions to deal with climate change should “respect, promote and consider their obligations on human rights, right to health and the rights of indigenous peoples, local communities, migrants, children, persons with disabilities and people in vulnerable situations.”

Pramisha Thapaliya, a member of the youth group CliMates Nepal, said that taking climate action while violating human rights would be heresy.

“Human rights are here as guidance,” she said. “If we fail to comprehensively and concretely integrate fundamental rights into our rule book, we condemn young and future generations to face the darkest hours unprotected and left behind.”

Sebastien Duyck of the Center for International Environmental Law also assailed the reported barring of entry of 12 to 14 activists to Poland.

“It is extremely alarming because it demonstrated that the Polish government had not yet awakened to the concept that the only effective climate action is one that builds on public ownership and with public support,” he said.

“We need effective participation of all voices otherwise there will be no effective implementation of the Paris Agreement.”

Poland’s deputy environment minister, Michal Kurtyka, said he was in contact with the authorities “to address the issue.”

“There is a commitment to allow everybody who wishes to engage constructively in this discussion, to be part of it,” said Kurtyka, president of the 24th Conference of the Parties (COP24) to the UNFCCC.

Thousands of activists from across the globe poured into the streets of Katowice, a city built on coal mining, on Saturday afternoon to demand climate justice outside the convention halls.

Carrying signs that called for a stop to the use of coal and fossil fuels, as well as for greater climate action, they marched from the city’s Freedom Square to near Spodek Arena, where COP24 was being held.

Sebastian Tuz, a Polish resident, carried a placard with his country’s coat of arms—a white, crowned eagle—but dirtied with the soot and smoke from coal-fired power plants, a main source of electricity in his country.

“If we still want to live in good condition, we have to demand change,” he said. “There is a lot of power in the people.”

Survivors of Supertyphoon “Yolanda” (international name: Haiyan), which flattened the Visayas in 2013, including activists Joanna Sustento and Saño’s younger brother, AG, also marched to call for climate justice. —With a report from the wires

Read Next
Sandiganbayan rejects firms’ plea on coco levy
EDITORS' PICK
UK’s Boris Johnson will resign, BBC reports
Unemployment rate up to 6% in May
Geek out at TOYCON 2022 powered by Smart Signature
High inflation: Your P1 is now worth only 87 centavos
High-risk pregnancy: Reducing your risk is in your hands
House energy committee chair Arroyo bats for cheap electricity
MOST READ
Suspect in grisly killing of missing woman in Bulacan arrested
Kim Atienza’s daughter flaunts bikini body in response to critics of her ‘revealing photos’
Japanese artist who created ‘Yu-Gi-Oh!’ found dead in the sea
UK PM quits as Conservative leader
Don't miss out on the latest news and information.