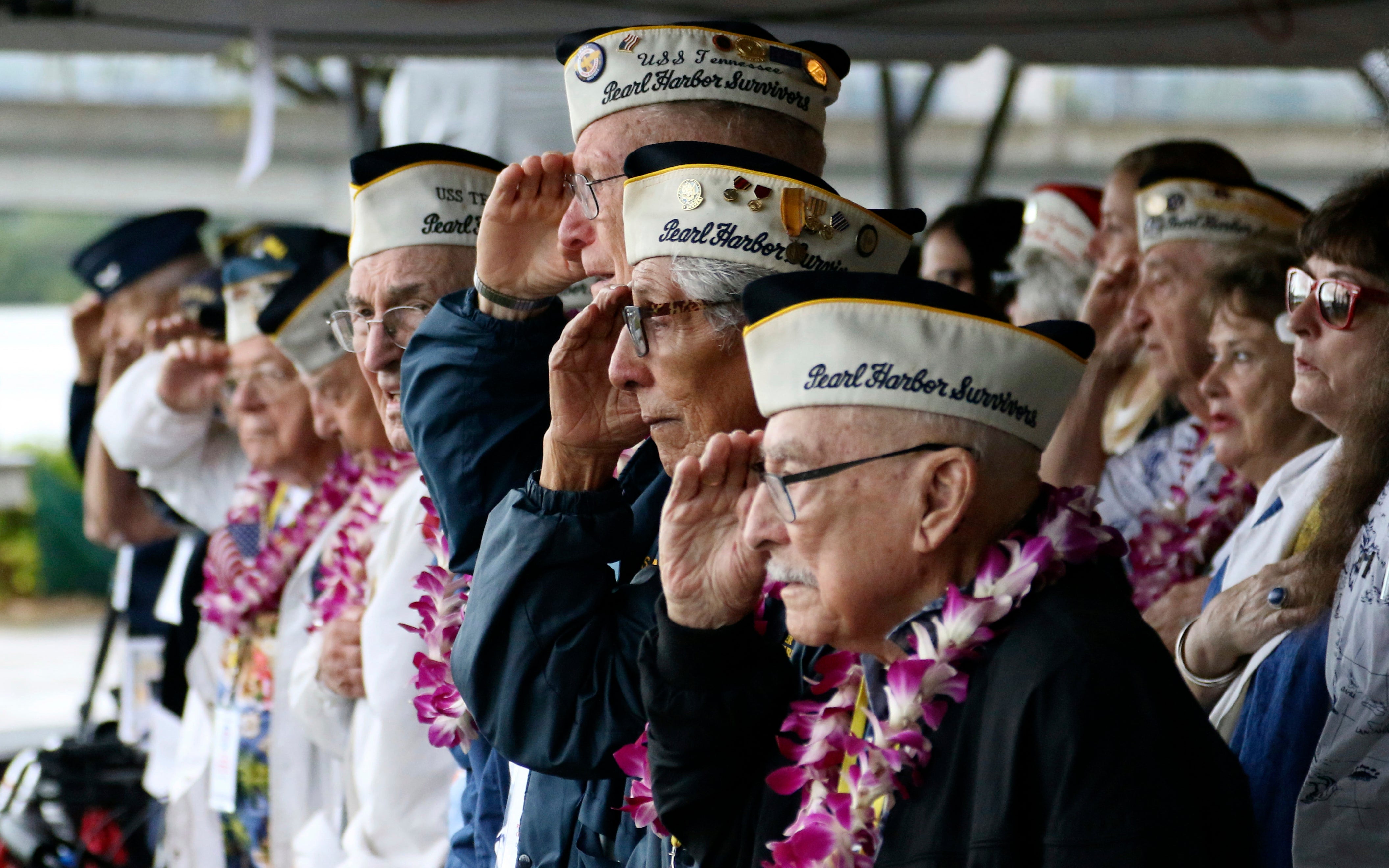 Pearl Harbor survivors salute during the National Anthem at a ceremony in Pearl Harbor, Hawaii on Friday, Dec. 7, 2018 marking the 77th anniversary of the Japanese attack. The Navy and National Park Service jointly hosted the remembrance ceremony at a grassy site overlooking the water and the USS Arizona Memorial. (AP Photo/Audrey McAvoy)

PEARL HARBOR, Hawaii — About 20 survivors gathered at Pearl Harbor on Friday to pay tribute to the thousands of men lost in the Japanese attack 77 years ago.

They joined dignitaries, active duty troops and members of the public in observing a moment of silence at 7:55 a.m., the time the bombing began on Dec. 7, 1941.

John Mathrusse was an 18-year-old seaman second class walking out of the chow hall on Ford Island to see a friend on the USS West Virginia when the bombing began.

“The guys were getting hurt, bombs and shells going off in the water. I helped the ones that couldn’t swim, who were too badly injured or whatever and helped them to shore,” said Mathrusse, now 95.

Mathrusse, who traveled to Hawaii for the event from Mountain View, California, remembers carrying injured people to the mess hall and setting them on mattresses grabbed from the barracks above.

Robert Fernandez, who was assigned to the USS Curtiss, recalls being petrified.

The 94-year-old from Stockton, California returns for the annual remembrance each year because he’s now alone after his wife died four years ago.

Adm. Phil Davidson, commander of the U.S. Indo-Pacific Command, said the nation can never forget the heavy price paid on that day. He cited 21 vessels damaged or sunk, 170 planes destroyed, more than 2,400 people dead, including servicemen and civilians.

“Despite these losses, it did not break the American spirit. In fact, it charged it,” he said in a keynote address.

The survivors are declining in number as they push well into their 90s, and are increasingly treated as celebrities. They say people ask for their autographs and request to take photos and selfies with them.

“I am given a lot of attention and honor. I shake hands continuously,” said Tom Berg, who lives in Port Townsend, Washington. Berg, who is 96, served on the USS Tennessee.

This year, no survivor from the USS Arizona attended the ceremony as none of the men were able to make the trip to Hawaii.

The Arizona sank after two bombs hit the ship, triggering tremendous explosions. The Arizona lost 1,177 sailors and Marines, the greatest number of casualties from any ship. Most remain entombed in the sunken hull of the battleship at the bottom of the harbor.

Dozens of those killed in the attack have been recently identified and reburied in cemeteries across the country after the military launched a new effort to analyze bones and DNA of hundreds long classified as “unknowns.”

In 2015, 388 sets of remains were exhumed from the USS Oklahoma and buried in a national cemetery in Honolulu. The Oklahoma had the second-highest number of dead after the Arizona at 429, though only 35 were identified in the immediate years after the attack.

The Defense POW/MIA Accounting Agency has identified 168 sailors and Marines from the Oklahoma since the exhumations three years ago. It has said it expects to identify about 80 percent of the 388 by 2020.

Several families were scheduled to rebury their newly identified loved ones on Friday, including Navy Seaman 1st Class William Bruesewitz of Appleton, Wisconsin.

His remains were buried at Arlington National Cemetery near Washington, D.C.  /muf