No bombs yet, but ‘lumad’ schools suffer Duterte wrath 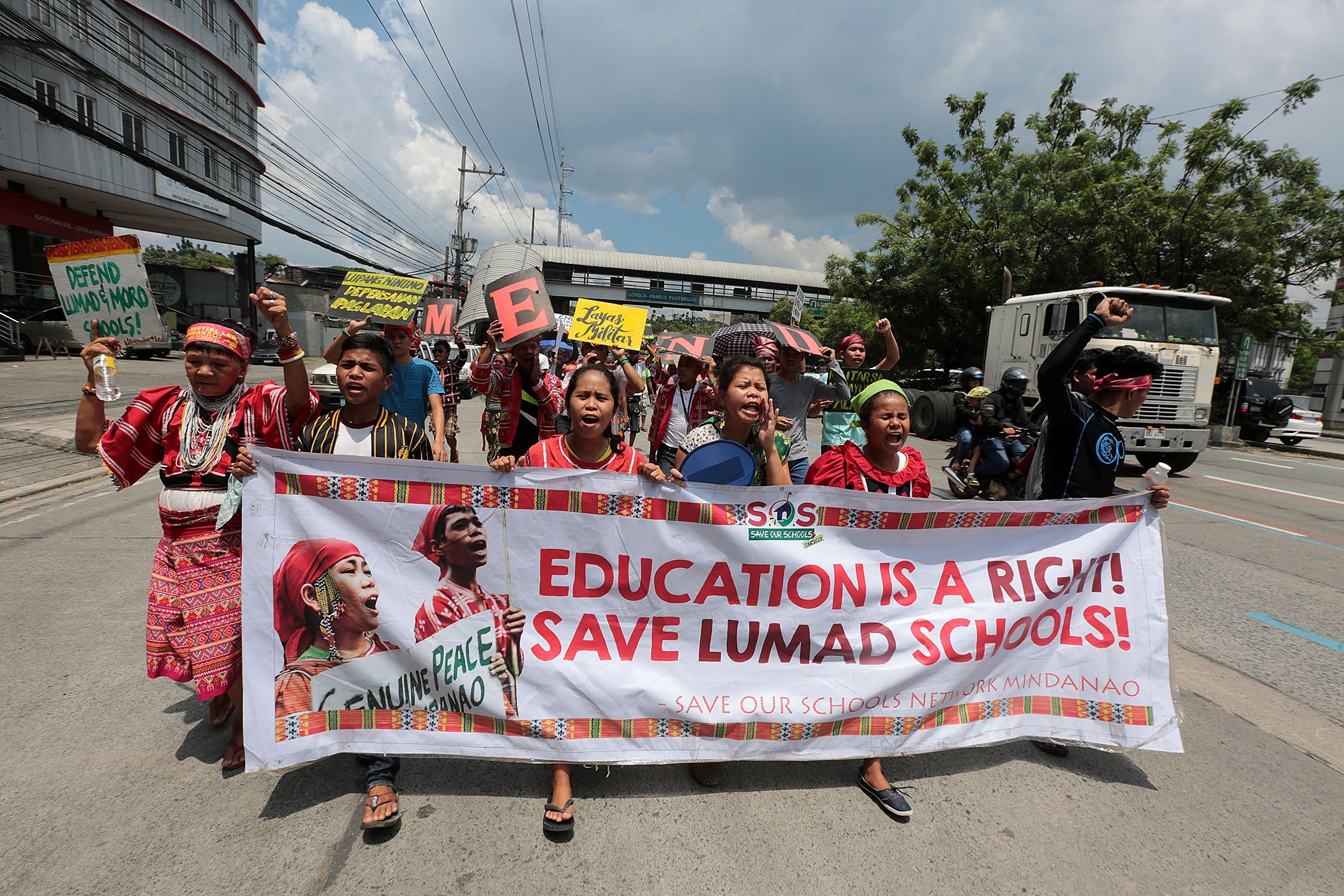 DAVAO CITY—In July last year, President Rodrigo Duterte said this about “lumad” (indigenous peoples) schools: “Get out of there. I’ll have those bombed, including your structures.”

“I will use the armed forces, the Philippine Air Force. I’ll really have those bombed because you are operating illegally and you are teaching the children to rebel against government,” Mr. Duterte continued.

The bombs have not fallen yet, but lumad groups accused by the President of conniving with communist rebels are feeling as much heat.

But Datu Kaylo Bontulan, a leader of the lumad group Salugpongan Ta Tanu Igkanugon (Unity to Defend the Land), said at least two of those presented were lumad members of the paramilitary group Alamara, which was created to shutdown and destroy the lumad schools.

The two Alamara members, Bontulan said, were Awing Guibang, son of former Salugpongan leader Datu Guibang Apoga, who had joined Alamara in 2016 when soldiers started camping out in the lumad communities.

Awing’s role had been to coerce or entice lumad to join Alamara to fight the New People’s Army, armed wing of the Communist Party of the Philippines, according to Bontulan.

Guibang had been active in Salugpongan but was forced to surrender when he got sick and soldiers surrounded his house, Bontulan said.

Another witness presented in Malacañang, Bontulan added, was Asenad Bago, a former student of a lumad school who had joined Alamara years ago after soldiers took over the school in 2011.

Another lumad leader, of the group Kalumaran, said the two witnesses had been tagged earlier as “fake.”

“They were the same personalities brought by Mocha Uson in the University of the Philippines,” said Dulphing Ogan, a leader of Kalumaran.

“They were booted out because they were fake and known attack dogs of the military who pretended to know the real situation of lumad,” Ogan said.

Ogan said the military and police were desperate to refile the trumped-up charges against the 18 political activists charged in Talaingod so they presented false witnesses.

“They are good at presenting false witnesses,” he said.

“Presenting lumad who have no credibility as witnesses only show their desperation to pin down” the 18 individuals arrested by police in Talaingod, among them former Bayan Muna Rep. Satur Ocampo, Ogan said.

Bontulan reacted strongly to accusations that lumad teachers had changed the words of the national anthem. “It was not true,” he said.

On Wednesday, the Regional Trial Court Branch 8 in Davao City ordered the Department of Social Welfare and Development (DSWD) to return 12 minors to their parents after they were taken from the group of Ocampo.

Ocampo’s group went to the village of Palma Gil in Talaingod on Nov. 28 after lumad school teachers sent SOS messages seeking rescue for the children.

Ocampo and the others were instead arrested for child trafficking and the children given to the DSWD.

Presiding Judge Glenn DC. Aquino ordered the DSWD to release the minors and return them to their parents and guardians on Wednesday.

“The court finds that respondents have no authority or lawful basis to retain the children in their custody, let alone, to deprive the petitioners, who are parents or lawful guardians of the children, of their custody and care,” read part of the court order.

The order came two days after parents and guardians of the 12 children, through their lawyers, filed a petition for writ of habeas corpus.

Two other children were still in DSWD custody. —REPORTS FROM GERMELINA LACORTE AND MART SAMBALUD