WHAT WENT BEFORE: The P10 billion pork barrel scam 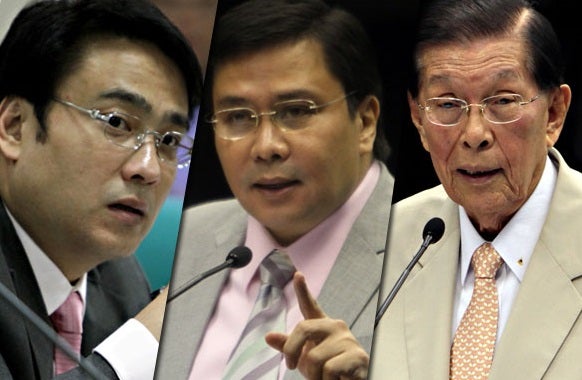 In 2014, the Sandiganbayan ordered the arrest of then Senators Ramon “Bong” Revilla Jr., Juan Ponce Enrile and Jinggoy Estrada for plunder and multiple counts of graft in connection with the P10-billion pork barrel scam.

The scam, reported first by the Inquirer in 2013, involved the use of nongovernment organizations to channel Priority Development Assistance Fund (PDAF) allocations of lawmakers into ghost projects for more than 10 years.

Janet Lim-Napoles, the businesswoman who allegedly masterminded the scam, was named a coaccused. She is detained at the Bureau of Jail Management and Penology facility in Camp Bagong Diwa, Taguig City.

Revilla was accused of plunder and 16 counts of graft after allegedly amassing P224.5 million in PDAF kickbacks from Napoles, the biggest amount among the three senators.

Estrada was accused of plunder and 11 counts of graft for allegedly pocketing P183 million from his PDAF allocation from 2004 to 2010.

Enrile was accused of receiving P172.8 million in kickbacks from his pork barrel funds. He also faces 15 counts of graft for the alleged misuse of his PDAF allocations.

All three senators surrendered. Enrile was detained at Philippine National Police General Hospital while Estrada and Revilla were held at the PNP Custodial Center, both in Camp Crame.

On December 2, 2014, the Sandiganbayan threw out Revilla’s bail petition.

Citing his advanced age and poor health, the Supreme Court granted bail to Enrile in August 2015. But the antigraft court’s Third Division denied his appeal to throw out the plunder charge.

Revilla’s case was the first to go on trial, which began in June 2017.

In September 2017, Estrada’s bail petition was granted before a separate graft trial against him started, but his motion to dismiss the case was denied.

In September 2018, as he laid down his final arguments, Revilla asked the Sandiganbayan to discredit the testimonies of the pork barrel scam whistleblowers and the documents he had disowned.

Revilla, represented by former Solicitor General Estelito Mendoza, claimed that the only element of plunder proven by the prosecution was the fact that he was a public officer.

All running for senator

In October 2018, Revilla, Enrile and Estrada all filed certificates of candidacy (COCs) for senator in the 2019 midterm elections.