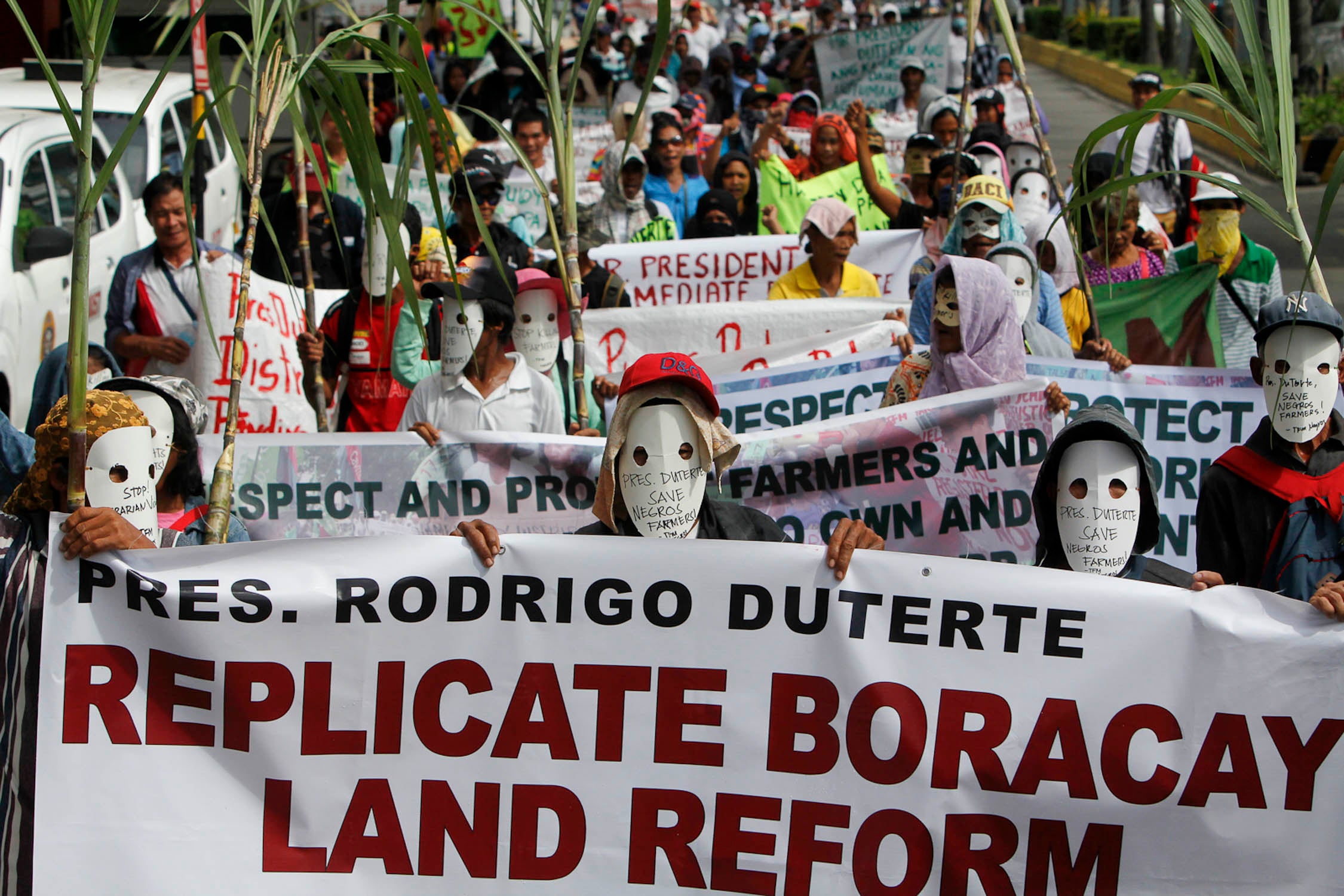 LAND REFORM PLEA Sugarcane farmers, during a march in Bacolod City on Wednesday, call on President Duterte to save their families’ lives by immediately distributing 5,000 hectares of lands covered by agrarian reform in Negros Occidental. —JIMMY A. DOMINGO/CONTRIBUTOR

About 1,000 farmers belonging to Task Force Mapalad (TFM) also joined a dialog with Department of Agrarian Reform (DAR) officials to demand the immediate distribution of 5,000 hectares of land under the Comprehensive Agrarian Reform Program (CARP).

The land is part of the remaining 125,000 hectares in Negros Occidental province that has yet to be distributed, Lanie Factor of TFM said.

During the dialogue at the provincial agrarian reform office here, Factor said the government should replicate its enforcement of land reform on Boracay Island.

Mr. Duterte should hasten action on land reform in Negros Occidental, she said, adding that the main causes of hunger, poverty and conflict in the province boil down to land.

Before the dialogue, the farmers marched on the streets of Bacolod, wearing festival masks to symbolize the province and carrying sugarcane to signify their hardships.

Some of them also carried placards with messages that read: “President Rodrigo Duterte: Replicate Boracay Land Reform in Negros Occidental,” “Mr. President: The lack of land for the farmworkers is the reason for the conflict,” and “Stop the killing of farmers: Justice for all victims of agrarian-related violence.”

Mr. Duterte earlier said he was looking into the possibility of declaring Negros Island as a land reform area to “resolve feudalism” in the region.

“I’m studying that … because there’s a lot of trouble there and … I’m telling you now, the problem really is land,” Duterte told reporters in Bohol province after the inauguration of Panglao International Airport last week.

Negros Occidental has the biggest backlog in terms of land acquisition and distribution of agrarian reform lands in the country.

Factor said TFM was ready to help government in giving farmworkers what is due them under CARP.

Agrarian Assistant Secretary for Operations, Elmer Distar, said his office was trying its best to resolve the concerns of farmers and complete land reform.

A TFM statement said the national DAR target was around 53,000 ha for distribution this year, but the agency had given out 13,000 ha only.

TFM also said the transfer and distribution of 5,000 ha under CARP in Negros Occidental were impeded mainly due to bureaucratic issues and resistance from landowners.

It said they were not only calling for the full implementation of CARP on Negros Island, but also for the whole country.