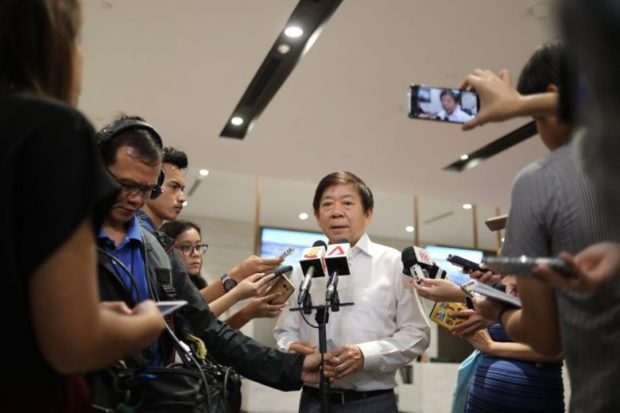 SINGAPORE —  Singapore-Malaysia ties took a sudden turn on two fronts on Dec 4, as simmering disputes over airspace and territorial waters came into the open.

Singapore said it had lodged a strong protest with Kuala Lumpur over its move to extend the Johor Baru port limits to encroach into the Republic’s territorial waters off Tuas.

The Republic added that it would not hesitate to take firm action against intrusions and unauthorized activities in its waters.

“Singapore has protested the unauthorized movements of, and purported assertions of sovereignty by, these vessels, which are inconsistent with international law,” it said.

“The Republic of Singapore Navy and the Police Coast Guard are safeguarding the sovereignty of Singapore territorial waters and enforcing the security of these waters on a 24/7 basis,” it added.

Mr Khaw said the Malaysian actions “are clearly a violation of our sovereignty and international law”.

The maritime clash surfaced just hours after Malaysia’s Transport Minister said Kuala Lumpur planned to retake charge of managing airspace over south Johor that had long been delegated to the Republic, drawing a swift response from his Singapore counterpart.

“It is not our stance to take a confrontational approach,” said Mr Anthony Loke. “But this involves our sovereignty, which the Malaysian government will defend in the strongest terms.”

This drew a swift response from Transport Minister Khaw Boon Wan, who said: “Airspace management has nothing to do with sovereignty, and many countries have their airspace, or at least part of (it), managed by other countries.”

Rather, it was about safety and efficiency, he added.

On the maritime front, Singapore’s Ministry of Transport said Malaysia announced the change to Johor Baru port limits in a notice in the Federal Government Gazette on Oct 25. Over the past two weeks, vessels from the Malaysian Maritime Enforcement Agency and Marine Department Malaysia have also repeatedly intruded into these territorial waters, the ministry added.

Malaysia also issued a port circular on Nov 11 and a notice to mariners on Nov 22 on the limits.

Singapore responded by lodging a strong protest with Malaysia. It asked it to amend the notices “to reflect the sovereignty of Singapore over the waters in question, and that Malaysia refrain from taking any further unilateral action”.

The Maritime and Port Authority of Singapore also issued a circular on Nov 30 instructing ship masters and owners of vessels to disregard Malaysia’s three notices, “which impinge on Singapore’s sovereignty”.

The Ministry of Transport added: “Malaysia’s purported extension of the Johor Baru port limits and the repeated intrusions by Malaysian government vessels into Singapore territorial waters are a serious violation of Singapore’s sovereignty and international law. These actions are unconducive to good bilateral relations, cause confusion for the international shipping community, and lead to increased navigational and safety risks for all parties.

“Singapore stands ready to engage with Malaysia to resolve these matters amicably, in accordance with international law,” it said.

Asked if there is a concern that the issues over airspace and port limits could escalate, Mr Khaw said he hoped not. “We have so many things that we want to work together on.”

As for Singapore’s actions over its waters, he added: “If you intrude into our space, there will be warnings: Move on, move away… There are standard rules of engagement.

“We do not want a misunderstanding which leads to an unnecessary accident or worse, then suddenly we have a crisis to handle.”