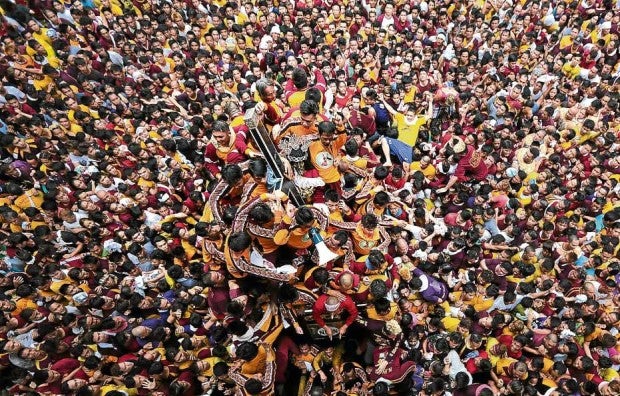 Thousands of devotees try to touch the image of the Black Nazarene in the Traslacion 2017. INQUIRER FILE / GRIG C.MONTEGRANDE

MANILA, Philippines — Environmental watchdog group EcoWaste Coalition on Thursday called on politicians running for the midterm elections in 2019 to restrain themselves from distributing leaflets and displaying tarpaulins during the annual Traslacion to popularize their names.

“As next year is election year, we appeal to all politicos and their supporters not to use the Traslacion to popularize their names and to add more garbage to the occasion,” Zero Waste Campaigner Daniel Alejandre of EcoWaste Coalition said in a statement.

The group asked them “not to put up tarpaulin banners and distribute campaign leaflets to the huge crowd that is expected to join the Traslacion.”

“Tarpaulitics, or the unrestrained use of tarpaulins to publicize candidates’ names and faces,” the group emphasized, “is not the way to earn the support of the electorate.”

EcoWaste Coalition also called on the devotees for a “trash-free celebration” on the annual Traslacion of the venerated image of the Black Nazarene on January 9, 2019.

“We appeal to the devotees of the Black Nazarene to take waste prevention to heart as they fulfill their religious vows,” Alejandre said.

He added: “Let it not be said that the age-old Traslacion has again turned into a ‘trash-lacion’ sullying every nook and corner of the processional route with garbage.”

Citing data from the Manila City Government, the group noted that 385 tons of garbage were collected from the Quirino Grandstand in Rizal Park to the Quiapo district during the traditional “Pahalik” and procession during the 2018 Traslacion.