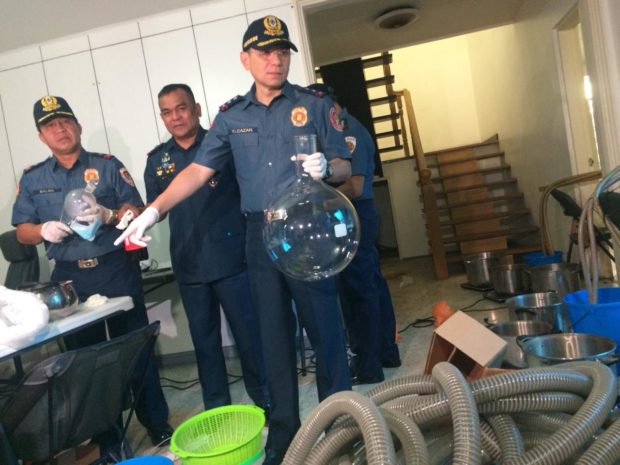 MANILA, Philippines — Police raided on Thursday a house in San Juan City which is allegedly being used as a laboratory for making “shabu” (crystal meth).

Armed with a search warrant, police raided the house at No.5 Arthur Street in North Greenhills, San Juan City. According to a report from the National Capital Region Police Office (NCRPO), the raided laboratory can produce around 30 kilos of “shabu” worth P204 million in one process,

Recovered from the laboratory were chemicals used in the making of shabu, an undetermined quantity of controlled precursors and other essential chemicals, and assorted suspected apparatus and equipment.

The raid which was witnessed by a local official. The alleged maintainer of the raided laboratory managed to elude arrest.

Senior Supt. Dindo Reyes, San Juan City Police chief, told INQUIRER.net that they have identified the alleged maintainer of the “shabu” laboratory but declined to reveal the identity as follow-up operations on other “shabu” laboratories in the eastern part of Metro Manila which are also allegedly being maintained by the suspect are set to be launched.

Reyes however confirmed that the suspect is a Filipino and belongs to a group with Kim Jeong Hee, a Korean national and alleged chemist who was recently arrested by the police for possession of illegal drugs.

Scene of the Crime Operatives and investigators are still processing the crime scene, the San Juan police said.  /muf