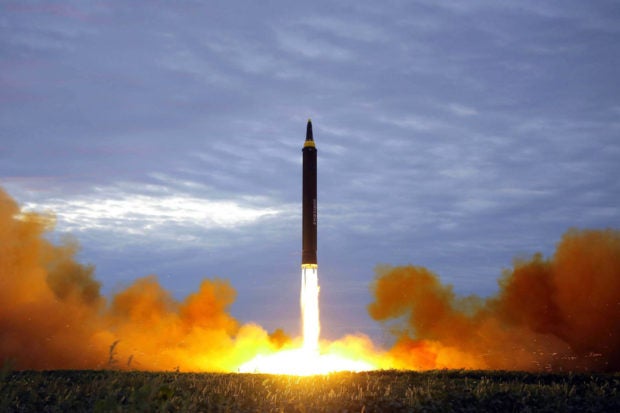 This Aug. 29, 2017 photo distributed on Wednesday, Aug. 30, 2017, by the North Korean government shows what was said to be the test launch of a Hwasong-12 intermediate range missile in Pyongyang, North Korea. AP

North Korea has expanded a key long-range missile base in the months since a summit between the country’s leader Kim Jong Un and US President Donald Trump, according to satellite images published by CNN on Wednesday.

The two men met in Singapore in June and signed a vaguely worded document that pledged to “work toward” the complete denuclearization of the Korean peninsula, though it did not detail specifics on how this would come about.

According to CNN, Pyongyang has upgraded the Yeongjeo-dong missile base in North Korea’s mountainous interior and has built up another facility that had not previously been publicly identified.

Experts told the US news network that the site’s location made it suitable to host North Korea’s newest long-range missiles, including ones that could carry nuclear warheads.

In a statement the Pentagon said: “We watch North Korea very closely but we cannot discuss intelligence.”

Trump said on Saturday that he hoped to organize a second summit with Kim in early 2019.

US officials insist on the complete, verified and irreversible denuclearization of the Korean peninsula before tough sanctions are lifted.

But the North has rejected demands for what it calls “unilateral” disarmament, and has instead sought unspecified reciprocal US measures in a gradual process. /cbb