newsinfo / Headlines
Headlines
‘WE WILL NOT BOTHER YOU’ 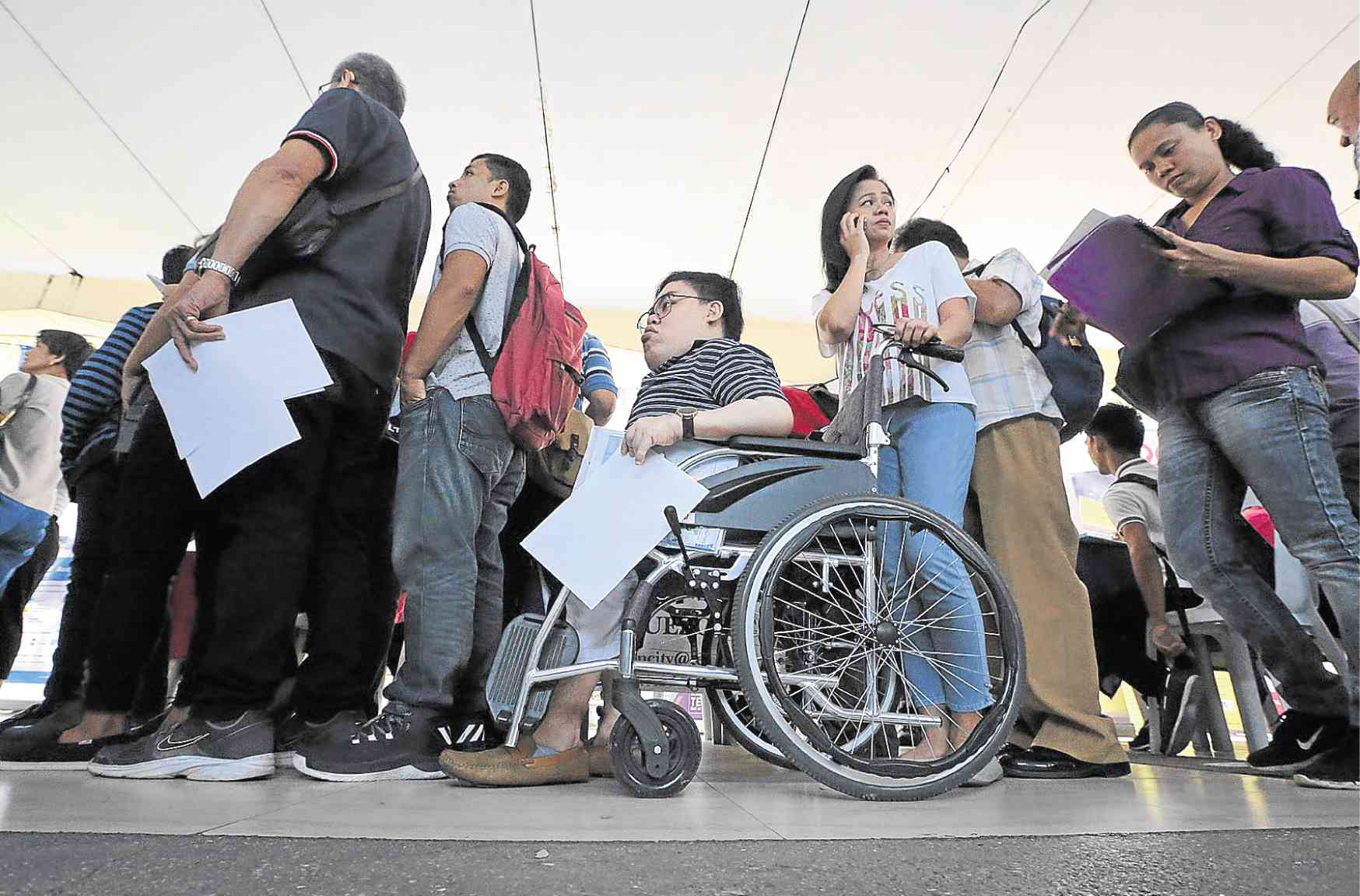 INCLUSIVE JOB MARKET Vincent Cruz (in wheelchair), a graduate of human resource management, joins the queue to register at the job fair held for persons with disabilities (PWDs) at the Quezon City Hall on Wednesday. Behind him is his mother, Monette. —GRIG C. MONTEGRANDE

An incentive awaits companies that will hire more persons with disabilities (PWDs).

Secretary Silvestre Bello III of the Department of the Labor and Employment (Dole) said such companies would be granted a yearlong “immunity from inspections” that routinely check their compliance with labor laws.

“If you would hire PWDs and they constitute not less than 10 percent of your total compliment, I will give you immunity from inspection for one year. We will not bother you,” Bello said on Wednesday, addressing an audience composed mostly of employers or personnel managers taking part in a job fair exclusively held for PWDs.

The one-day fair was held by Dole at the Quezon City Hall in partnership with the Rotary Clubs of District 3830.

Bello explained though that the one-year immunity doesn’t necessarily mean that these companies would no longer be charged if later found to be in violation of labor laws.

Under Republic Act No. 10524, which expanded the positions reserved for PWDs, government offices and private companies with more than 100 employees are required to set aside at least 1 percent of their job slots to qualified PWDs.

As of noon on Wednesday, the job fair had attracted over 400 PWD applicants, with at least six of them hired on the spot, the Dole said.

Apart from the fair, the event also featured livelihood and skills training sessions in line with the government’s celebration of International Day for PWDs. —Jovic Yee

Read Next
COA flags National Printing Office deals worth P139M
EDITORS' PICK
A delightful blessing!
Gov’t plans to open COVID-19 vaccination for 5- to 11-yr-olds by January 2022
Gov’t eyeing COVID-19 vaccine booster for essential workers, indigents by Dec. 10
Villar Group gears up for AllValue Shopping Party on Dec. 3; around P 1-million promos and discounts up for grabs
Omicron variant detected in more countries as scientists race to find answers
Legarda: Ending Violence Against Women, a cause for all
MOST READ
Quiboloy warns of ‘much worse than Omicron virus’ if his ‘persecution’ is not stopped
Marcoleta defends pol ads on ABS-CBN
MMDA: Number coding during afternoon rush hours back this week
PH updates ‘red list,’ travel ban imposed on 7 more countries
Don't miss out on the latest news and information.