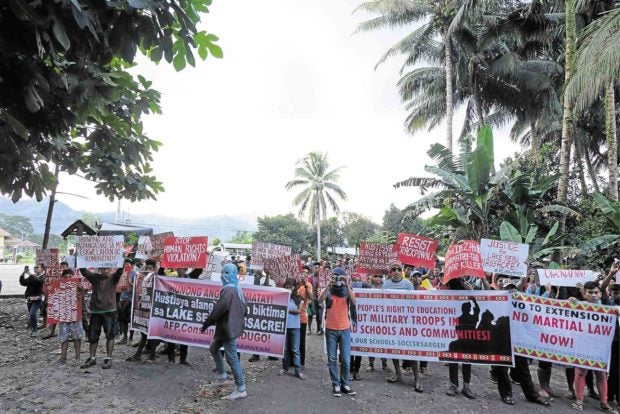 PROTEST In this photo taken last year, indigenous peoples groups and their supporters gather in front of the 27th Infantry Battalion headquarters in Tupi, South Cotabato, to protest against the killing of Datu Victor Danyan and six others. —BONG SARMIENTO

Erlan Deluvio, CHR regional director in Soccsksargen (South Cotabato, Cotabato, Sultan Kudarat, Sarangani and General Santos), said Lt. Col. Harold Cabunoc, commander of the 33rd Infantry Battalion (IB) based in Sultan Kudarat, and Lt. Col. Benjamin Leander, former commander of the 27th IB based in South Cotabato, were cited for their roles in the Dec. 3, 2017 clash at Barangay Ned, where a tribal leader and six community members were killed.

“[They are] liable for human rights violations for their utter failure to exert earnest efforts in distinguishing combatants from noncombatants under the principles of distinction of International Humanitarian Law,” Deluvio said in a resolution on Oct. 5 that was obtained by the Inquirer only on Monday.

Datu Victor Danyan Sr., chair of the T’boli Manobo S’daf Claimants Organization, a group based in Sitio Datal Bonlangon, and six community members were killed in what human rights and militant groups had described as a massacre.

Leander, who was replaced as 27th IB commander in January, and Cabunoc had filed a motion for reconsideration on the findings of the CHR regional office.

In their defense, they said a legitimate encounter between soldiers and the New People’s Army (NPA) rebels broke out in the area, resulting in the death of the tribal chieftain and six others.

Two soldiers were also killed in the clash, they said.

Cabunoc said the court would eventually decide on the merits of the case.

“I will never falter in performing my constitutional mandate of protecting the people against armed aggression by the … NPA and their auxiliary forces, like the group of [Danyan],” he told the Inquirer on Monday.

“If Datu Victor was fighting for his rights, I am also obliged to defend the … workers of Dawang Coffee Plantation against the planned attack by NPA [rebels] who supported [Datu] Victor’s armed followers in seizing lands from [plantation owners],” he added.

In the CHR’s nine-page resolution, Cabunoc and Leander claimed the military operation was triggered by intelligence reports that the NPA’s “Platoon Arabo” and “Platoon My Phone” had merged at Sitio Datal Bonlangon allegedly to launch an attack against coffee producer Silvicultural Industries Inc.

Witnesses presented by the military claimed that Danyan and the rebels were allegedly hatching a plan to attack the plantation on Dec. 10 last year, in line with the tribe’s bid to reclaim the lands.

But Deluvio said a CHR investigation showed that Danyan’s community was not a guerilla base. He said the supposed NPA camps identified by the military were detachments of government militiamen and company guards.

Autopsy results on the seven bodies showed that five died from bullet wounds, one from a “blunt force and traumatic injuries to the head and body,” and the other from a stab wound.

“It appears to the commission that the cause of death of the two victims seems to show inconsistency with the claimed encounter by the respondents,” Deluvio said.