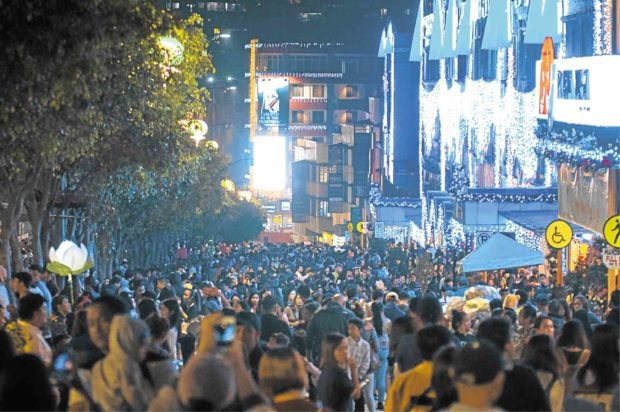 BAGUIO CITY — Judging from the big crowd of mostly tourists that packed streets in downtown Baguio last weekend, the tourist season here has started to peak, not in February when the city stages its flower festival.

On Saturday night at the start of the annual Christmas celebration here, tourists mingled with thousands of students who held their lantern parade on busy Session Road.

That parade caused massive traffic jams on streets outside the central business district. Traffic was already bad on Friday when tourists came in droves for the three-day weekend.

Last year, Baguio had 198,599 tourists in December, much higher than the 129,572 visitors who arrived for the Panagbenga (Baguio Flower Festival) in February.

The Saturday evening parade staged by students of Saint Louis University here was the climax of a busy weekend that began with the traditional children’s mardi gras. —Vincent Cabreza