Gordon: No raps vs Lapeña for ‘shabu’ smuggling | Inquirer News

Gordon: No raps vs Lapeña for ‘shabu’ smuggling 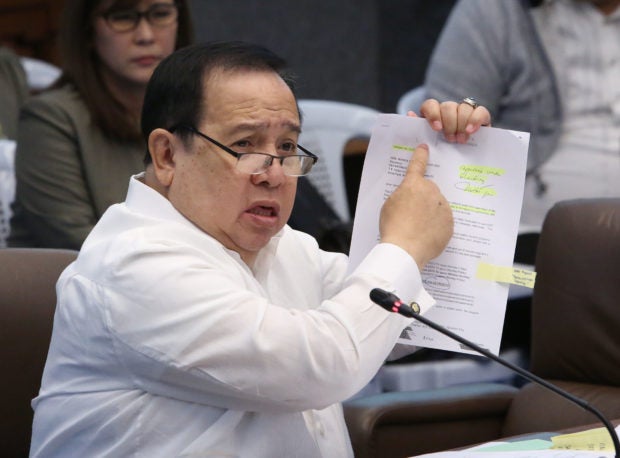 Reporters asked him about that issue after he concluded the hearing of the Senate blue ribbon committee, which he  chairs, about the massive shipment of crystal meth, or “shabu,” that slipped past the BOC.

Former Customs intelligence officer Jimmy Guban, though admittingbeen involvement in the shabu shipment, would be a state witness and therefore immune from criminal cases, Gordon said.

He would also recommend filing criminal cases against the consignee.

The alleged consignee for the magnetic lifters supposedly containing P6.8 billion worth shabu is SMYD Trading, owned by Marina Signapan.

Gordon also said he would recommend criminal charges against Police Insp. Lito Pirote, who allegedly gave Guban P300,000 to cover up for the SMYD Trading.

Gordon said the finding of the blue ribbon committee should provide enough basis for the Department of Justice to file charges against those mentioned.

[I was piecing everything earlier… You will see that the circumstancial connection is beyond reasonable doubt.]

“You can prove the case even with the circumstantial evidence,” he said. “My intention is to discuss this matter with the Secretary of Justice as I’ve discussed this previously with him and I hope that they will look at it and make it a guide and make themselves a deadline for filing of cases.”

Gordon also said “negligent” officers from the PDEA BOC would be removed from office.

He added that X-ray officers of the BOC should be fired by new BOC chief Rey Leonardo Guerrero.

[It’s up to Guerrero to take care of that.]

Gordon said the two witnesses who surrendered last week, Emily Liquingan and Marina Signapan, would remain under Senate custody until they could make their affidavits.

But Gordon said he would order Signapan arrested for her involvement in the shabu smuggling.

“We will discuss that with my staff to find out whether we will let them go or we’ll get their evidence in their testimony para meron na kaming testimony,” he said.