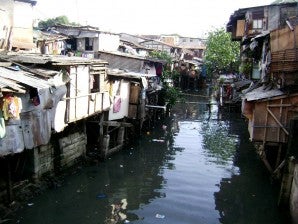 Many urban poor Filipinos live in creekside shanties as shown in this photo taken in Guadalupe, Makati City. Kabataan Rep. Raymond V. Palatino on Monday scored the NSCB for adopting a new poverty threshold level which he said “deceptively” led to a reduction in the poverty rate from 26.3 percent to 20.9 percent. INQUIRER.net FILE PHOTO/Don Lejano

Lawmakers are pushing for a more realistic yardstick for counting the number of poor Filipinos after the government lowered the minimum daily subsistence level from P52 to P46 per person, a move that significantly lowered the country’s poverty incidence.

Kabataan Representative Raymond V. Palatino on Monday scored the National Statistical Coordination Board (NSCB) for adopting a new poverty threshold level which he said “deceptively” led to a reduction in the poverty rate from 26.3 percent to 20.9 percent.

“We are able to reduce poverty not by improving the lives of Filipinos but through statistical magic. The new scheme effectively decreases the number of poor Filipinos by 5.3 million without improving the poverty situation. If this was presented without explaining the drastic change in the methodology, it could be used to push for economic results,” Palatino said in an interview with the Philippine Daily Inquirer.

Palatino authored House Resolution No. 960 which seeks to investigate the NSCB adoption of a new poverty measurement scheme.

At the first hearing of the House committee on poverty alleviation on November 29, most lawmakers called the substantial reduction in the poverty rate  “window-dressing.”

The reduction was meant to justify the government’s massive spending for the poor, specifically the conditional cash transfer (CCT) program, according to Palatino. The CCT program was started by the Arroyo administration and continued by the Aquino administration.

Gabriela Representative Emmi de Jesus said the government should adopt a poverty yardstick which would reflect the situation of millions of Filipinos.

“The old estimate was already low when in fact prices of basic commodities and services continue to soar every day,” De Jesus said.

In his presentation to the House members, Mahar Mangahas of the polling outfit Social Weather Stations (SWS) said: “It (NSCB) downgraded the quality of the diet of the borderline poor [so] as to cut the food threshold. By reducing the officially seen evidence of poverty, it covered up the extent of the poverty.”

In the new methodology, the breakfast menu was reduced to scrambled egg, coffee with milk and boiled rice (milk for children was scrapped); the lunch menu was trimmed to boiled monggo with malunggay leaves and dried dilis (anchovy in lieu of shrimps); the dinner menu was limited to fried tulingan (a tuna species, instead of pork adobo), boiled kangkong (swamp spinach, which is cheaper than pechay) and boiled rice; and the pan de sal snack would be served plain without margarine.

Mangahas pointed out that the NSCB had allotted 31 centavos a day for the nonfood requirements of each person and 69 centavos set aside for food for every peso needed for minimum daily subsistence.

He said that based on “old estimates,” the Philippines would have had a poverty rate of between 32.9 percent and 37.3 percent which would make it the worst or second-worst in Southeast Asia.

“The NSCB’s poverty  ‘refinement’ should be rejected, because reducing the evidence about poverty is against the principle of evidence-based policy making,” Mangahas said.

In a letter to the House committee, NSCB Secretary General Romulo Virola said the agency tweaked the poverty measure—shifting from what it called regional to provincial food bundles—to “enhance the comparability of the thresholds across space and over time.”

Virola said the food items were retained in the poverty threshold because they cost the least, were locally available and “visualizable” or could be cooked or eaten in one meal.

The NSCB chief added that the food items would satisfy the recommended energy and nutrient intake for energy and protein (100 percent), and vitamins and minerals (80 percent).