Tourism slumps in Tijuana since arrival of migrants 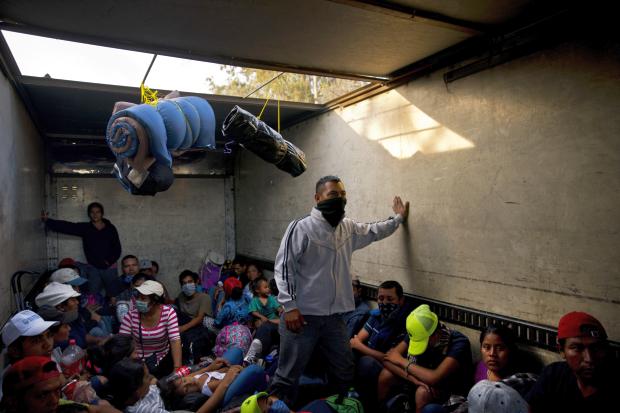 Migrants travel in a truck from Mexicali to Tijuana, part of the migrant caravan, in Mexico, Tuesday, Nov. 27, 2018. The mayor of Tijuana has declared a humanitarian crisis in his border city and says that he has asked the United Nations for aid to deal with the approximately 5,000 Central American migrants who have arrived in the city. (Photo by RAMON ESPINOSA / AP)

SAN DIEGO — Tour operators and medical and dental offices in the Mexican border city of Tijuana are reporting a slowdown in business since a caravan of Central American migrants arrived.

Tourists and visitors have been cancelling planned trips to the Mexican state of Baja California since the border crossing shut down briefly a week ago, and according to tour-friendly business owners, many fear getting trapped in Mexico should the crossing close again, the San Diego Union-Tribune reported Sunday.

“It’s very disappointing because everything is normal in Tijuana, and it’s a very isolated area where the migrants are,” he said.

Thousands of migrants, mostly Hondurans, have joined caravans in recent weeks in an effort to speed across Mexico to request refuge in the United States.

The border crossing — which Tijuana residents use to reach jobs and shopping on the U.S. side and U.S. tourists use to head south — was closed briefly last weekend after some migrants tried to rush across.

About 6,000 migrants were staying in an overcrowded shelter that authorities closed over the weekend, moving people instead to a former concert venue further from the border. Dozens of migrants interviewed by The Associated Press have said they are fleeing poverty and violence back home.

The Rosarito Beach Hotel, which hosts many American tourists, has seen business drop 60 percent, said owner Hugo Torres. And members of the Tijuana medical association are offering discounts and benefits for local and U.S. patients to try to make up for lost business.

Georgina Carabarin, a prosthodontist in Tijuana, said about 70 percent of her patients come from San Diego.

“Right now, we’re hoping everything goes back to normal,” she said. “On the news, they keep saying there are more people coming, so some patients are saying let’s wait for the situation to cool down and then we’ll set up another appointment later.” /atm

Protesters chant ’Out!’ at migrants camped in Tijuana