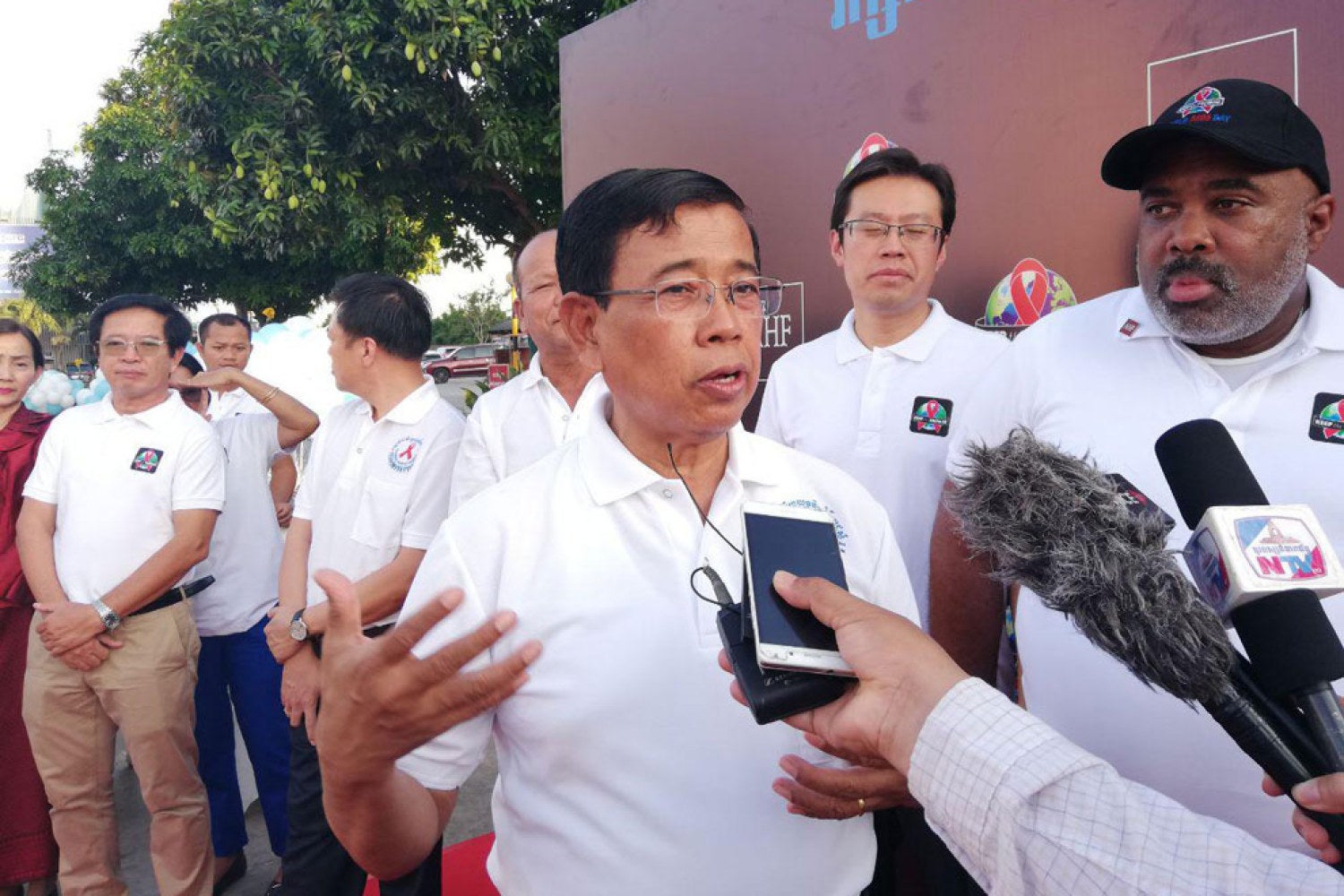 The chairman of the National AIDS Authority (NAA), Ieng Moly speaks to the reporters at an event marking World AIDS Day 2018 in Phnom Penh on Saturday. The Phnom Penh Post/Asia News Network

PHNOM PENH — The chairman of the National AIDS Authority (NAA) said on Saturday that Cambodia is successfully combating AIDS, having reached 90 per cent of its 2025 target.

However, there are concerns about the number of AIDS patients who do not seek treatment.

Ieng Moly was speaking at a ceremony to mark World AIDS Day 2018 at Phnom Penh’s Koh Pich Exhibition Hall, organised jointly by the NAA and the AIDS Healthcare Foundation (AHF), which works with 42 countries around the world.

More than 67,000 Cambodians have AIDS and approximately 50,000 people have received medical care from the NAA and AIDS healthcare services organisations.

However, another 10,000 AIDS victims live in hiding and receive no treatment.

“We don’t have exact numbers. There is a risk that they might transmit the disease to others if they don’t receive health care. We are worried,” Moly said.

He said Cambodia had set a deadline to completely eliminate AIDS and HIV by 2025, while other countries have set a set deadline of 2030.

The final phase of the AIDS elimination plan is challenging because funds have been decreasing.

“The organizations have provided us $40 million for three years but Cambodia needs $20 million per year. We don’t have enough money,” Moly said.

‘Much work left to be done’

AHF Cambodia bureau chief Chhim Sarath expressed hope that World AIDS Day will reinvigorate the HIV response both in Cambodia and across the globe.

“In collaboration with the [government, especially the NAA] and other partners, we’re proud to say that over half of [AIDS sufferers] are receiving care and treatment with AHF support,” Sarath said.

AHF president Michael Weinstein said: “Much work is still left to be done. With almost 37 million people living with HIV or AIDS worldwide, and realistically just over half of them on lifesaving treatment, it’s clear that the world is not on pace to meet established global treatment targets.

“In addition, funding for HIV has decreased by $3 billion over the past six years. If we truly want to keep up and build on the progress we’ve made, world leaders must keep their promise on AIDS by placing it high on the public health agenda and ensuring that the Global Fund is fully funded,” he said.

According to the latest report issued by The Joint United Nations Programme on HIV/AIDS (UNAIDS), every year 1.8 million people become infected with the virus and 940,000 die of AIDS-related causes.