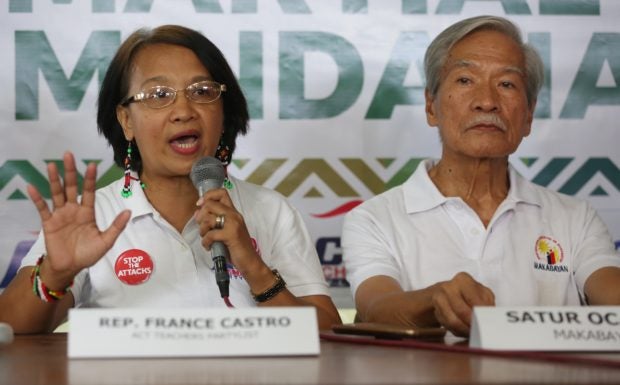 FIGHTING BACK ACT Teachers Rep. France Castro (left) says the decision to file counter charges against the police and military officers who detained her, former Bayan Rep. Satur Ocampo (right) and 16 others in Talaingod, Davao del Norte province, is “definitive.” The group held a press conference upon their return toManila on Sunday. —NIÑO JESUS ORBETA

A group of lawmakers from the Association of Southeast Asian Nations (Asean) on Sunday urged the Duterte administration to throw out the “baseless” kidnapping and human trafficking charges against ACT Teachers Rep. France Castro.

Castro, former Bayan Muna Rep. Satur Ocampo, and 16 others were held and detained by the military on Thursday after rescuing a group of children from a “lumad” (indigenous) community in Talaingod, Davao del Norte province, who had accused a paramilitary force of harassing them.

Charles Santiago, a Malaysian parliament member and chair of the Asean Parliamentarians for Human Rights (APHR), noted that Castro was the latest opposition lawmaker to be indicted and jailed under the Duterte administration.

“The systematic attempts by the Duterte administration to use fabricated criminal charges against members of the opposition are deeply worrying and must end immediately,” Santiago said in a statement.

“The (Filipino) people, and those elected to represent them, must be allowed to voice peaceful criticism against the authorities without fear of arrest and harassment,” he said.

Sen. Antonio Trillanes IV is fighting off attempts by the Duterte administration to put him behind bars for criticizing the President, who invalidated the amnesty given to him in 2011 as a military rebel and ordered the rebellion and coup d’état cases against him revived.

Santiago said the accusations against Castro, an APHR member, were “baseless charges … [that] appear to be purely politically motivated.”

“Instead of targeting those trying to assist beleaguered indigenous communities, the Philippine authorities should do much more to end abuse by paramilitary groups in Mindanao,” he stressed.

Bayan Muna Rep. Carlos Zarate welcomed the release from detention of Castro and the others following a local court order after they posted bail of P80,000 each.

“Make no mistake about it: While we welcome this victory, those responsible for these despicable acts cannot just rest yet because they will be surely made accountable,” Zarate said.

“As can be seen by this incident, the [military] and the [police] are quick to clamp down on those who are helping lumad and brand them as criminals, while they themselves instigate violence against indigenous people by using paramilitary forces like the Alamara,” he lamented.

Castro, Ocampo and the other activists returned to Manila on Sunday and, together with Zarate, vowed to bring countercharges against the police.

“This is what I can tell you: This will not go unanswered,” Zarate said.

“For too long a time, the police have been filing trumped-up charges. I think it’s high time we filed countercharges against them,” he said.

Castro said there was no timeline for filing charges, but the decision was “definitive.”

Zarate said it was possible graft charges would be brought against the Philippine National Police.

“This will send a message that impunity will not go unanswered,” he said. “It will be a lesson to those in positions of power that there is no forever.”

Castro, Ocampo and the other activists were rescuing teachers and schoolchildren from the lumad Salugpongan Community Learning Center in Talaingod who had called for help against harassment by Alamara when they were intercepted and arrested by joint police and military forces on Wednesday night.

Charges of kidnapping and human trafficking were brought against the activists the following day.

Anakpawis Rep. Ariel Casilao claimed that the charges against his fellow militant lawmaker were part of the government’s “desperate moves to curtail the rights” of those helping the indigenous peoples.

“Clearly, the charges are false in the beginning. Definitely, it will backfire [on] all those behind the fabricated charges against them,” he said.

Communist Party of the Philippines (CPP) founder Jose Maria Sison on Saturday condemned the arrests and warned that the Duterte administration would “accelerate their dirty work” by using the same tactic against progressive militants.

Sison compared the police-military operation against activists to the Arroyo administration’s “Bantay Laya” counterinsurgency program that had been linked to disappearances and extrajudicial killings.

Presidential spokesperson Salvador Panelo brushed off Sison’s complaint on Sunday, saying the activists were given due process and allowed bail.

“There was an inquest, and the fiscal saw that the trafficking and kidnapping charges [could not] stand,” Panelo said in a radio interview.

He said the judge who allowed bail would not accept the charges if there was no probable cause.

“Let us allow the law to run its course. They have the right to defend themselves, they are entitled to the presumption of innocence. They are granted bail so they can prepare. So let us let the judiciary to do its job,” Panelo said. —With reports from Matthew Reysio-Cruz and Julie M. Aurelio

Read Next
Proposal goes wrong; police to the rescue
EDITORS' PICK
PNP to maintain checkpoints during GCQ to ensure compliance to health protocols
DOTr bares 2 phases of public transport revival in GCQ areas
LIST: What to expect in areas under GCQ, MGCQ
Cherry Mobile teams up with Cloud Panda PH, launches online store
SM prepares for ‘safe malling’
Notice of 2020 regular meeting of stockholders June 18, 2020
MOST READ
LIST: What to expect in areas under GCQ, MGCQ
Duterte approves Metro Manila’s shift to GCQ starting June 1
DOH explains: Only 109 of record-high 539 COVID-19 patients were ‘fresh cases’
OFW back in Leyte hometown but tests positive for coronavirus
Don't miss out on the latest news and information.