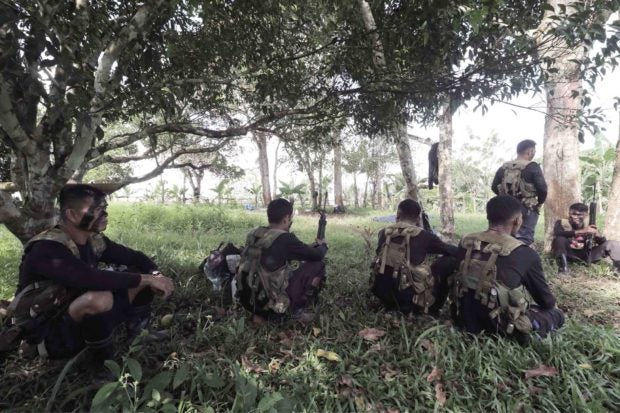 READY FOR WARNew People’s Army rebels rest near a rebel camp in North Cotabato during ceremonies for the release of a rebel prisoner in December last year. —BARRY OHAYLAN

LUCENA CITY — Communist rebels are set to observe a holiday truce even after President Rodrigo Duterte had declared a full-scale war on the Communist Party of the Philippines (CPP) and its armed wing, New People’s Army (NPA), according to CPP founder Jose Ma. Sison.

“It is to the interest of the people, the NPA and other revolutionary forces that there be the traditional holiday ceasefire,” Sison said in an online interview from his base in Utrecht, the Netherlands, on Sunday.

He said the break from war would allow guerillas and their families to “freely enjoy” the celebration of the 50th anniversary of the CPP on Dec. 26.

The CPP and NPA have been waging a protracted revolution against the government for the past 50 years and getting support mostly from victims of injustices, poverty and lack of land reform in remote rural areas.

Sison, however, said the CPP leadership based in the Philippines would have the last say on the holiday ceasefire.

It has become a tradition for the military and communist guerillas to observe a truce during the holidays through separate ceasefire declarations.

It has become common, too, for both sides to accuse each other of ceasefire violations.

Col. Noel Detoyato, public affairs office chief of the Armed Forces of the Philippines, said the military would welcome such a declaration from communist rebels.

“I hope they are serious and it reaches down to the last man on the ground,” Detoyato said.

Detoyato added that he hoped the truce extended beyond the holidays, though.

“We hope that it will be a ceasefire forever,” he said.

Last week, President Duterte declared he was no longer interested in resuming peace talks with the National Democratic Front of the Philippines, the umbrella organization of underground rebel groups including the CPP and NPA.

The President said he would instead pursue a full-scale war on communist rebels.

“The earlier we finish the insurgency, the better for us all,” the President said in Davao City where he also sought the help of a tribal militia head accused of killing tribal leaders suspected of helping the NPA.

Sison predicted that the coming Christmas season “will be harsh and miserable” for poor Filipinos because of rising unemployment, low incomes and soaring prices of basic commodities.

“These difficult economic conditions are aggravated by Duterte’s final rejection of peace talks, deployment of more troops, threats of martial law, formation of death squads, among many others,” Sison said.

Sison claimed that even government forces “are already complaining against being overused and fatigued by Duterte’s constant orders of military operations.”

“They will be kept in the field even during the Yuletide season and not given time to rest and enjoy the holidays with their families,” Sison said.

In a report, the police chief of Magsaysay town in Davao del Sur province said a soldier was wounded when rebels clashed with members of the Army’s 39th Infantry Battalion.