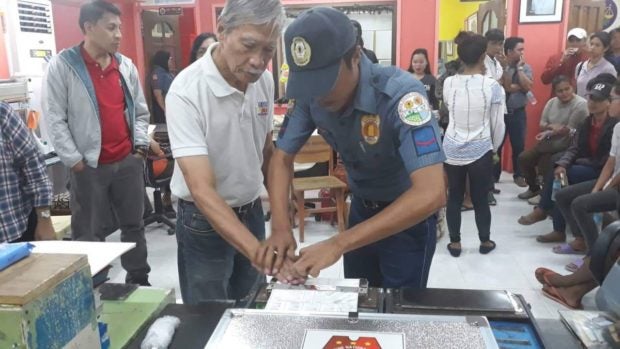 Former Bayan Muna Rep. Satur Ocampo undergoes booking procedures on November 29, 2018 before the filing of his case at the prosecutor’s office. (Photo from Police Regional Office 11)

The court said the 18 respondents including Ocampo and Castro “are still presumed innocent and no Information have been filed against them, their supreme right to liberty must be upheld.”

Joel Mahinay, counsel for the accused, said each of them posted bail of P80,000 — or a total of P1.4-million — on charges of human trafficking, kidnapping and failure to return a minor.

In its supplemental order, dated Dec. 1, 2018, the court noted that the police, according to their counsel Louie Padillo, maintained that they would not release Ocampo and the 17 others.

Padillo insisted that the accused had requested a preliminary investigation so that they could respond to the allegations and present evidence before the prosecutor.

Padillo said the P80,000 bail was only for violation of the Anti-Child Abuse Law, or Republic Act No. 7610.

“We have advised PO [Police Officer] Lawyer Padillo to file a pleading and the other lawyer to clarify the matter with Prosecutor [Norman] Solis, to enable us to rule on it. They failed to heed the advice,” the court said.

“We do admire and appreciate our police force for doing their job. We also admire the good argument of PO Lawyer Louie Padillo. However, we must rule in favor of the respondents,” the court said.

The court pointed out that it was up to its discretion whether to grant the bail recommendation by the prosecutor or not.

Citing the Rules on Criminal Procedure, the court said “any person in custody who is not yet charged in Court may apply for bail with any Court in the province, city or municipality where he is held.”

The court said the 18 respondents, including Ocampo and Castro, “are still presumed innocent and no Information have been filed against them, their supreme right to liberty must be upheld.” /atm