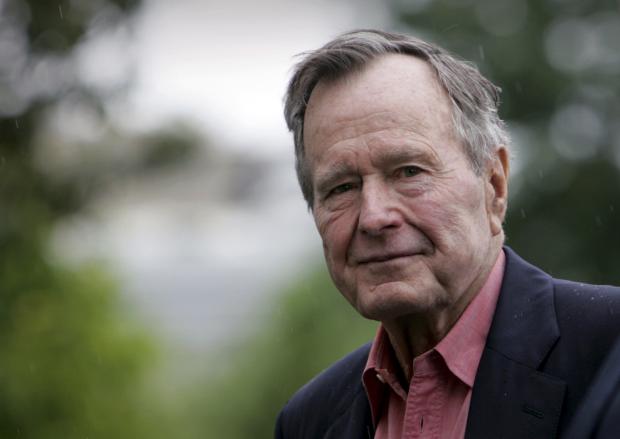 In this photo, taken May 11, 2008, former President George H.W. Bush arrives on the South Lawn of White House in Washington. Bush died at the age of 94 on Friday, Nov. 30, 2018, about eight months after the death of his wife, Barbara Bush. (Photo by LAWRENCE JACKSON / AP)

US President Donald Trump and first lady Melania Trump on Saturday mourned the death of former US President George H.W. Bush and praised him for inspiring generations of Americans to render public service.

“Through his essential authenticity, disarming with and unwavering commitment to faith, family and country, President Bush inspired generations of his fellow Americans to public service – to be in his words, ‘a thousand points of light’ illuminating the greatness, hope and opportunity of America to the world,” Donald and Melania Trump said in a joint statement on Twitter.

On Friday night (US time), Bush passed away, about eight months after his wife, Barbara Bush died.

Trumps then said, Bush always “set the bar higher,” noting several achievements of the late US President such as being the youngest aviator in US Navy, Texas Congressman and envoy to China, among others.

“President Bush always found a way to set the bar higher. As a young man, he captained the Yale baseball team, and then went on to serve as the youngest aviator in the United States Navy during the Second World War,” they said. “Later in life, he rose to the pinnacle of American politics as a Congressman from Texas, envoy to China, Director of Central Intelligence, Vice President of eight years to President Ronald Reagan, and finally President of the United States.”

They also noted Bush’s humility amid all his contributions and guidance to Americans.

“As President, he set the stage for the decades of prosperity that have followed. And through all that he accomplished, he remained humble, following the quiet call to service that gave him a clear sense of direction,” they said.

He served as the US President from 1989 to 1993. He was also a World War II hero, Texas congressman, CIA director and Ronald Reagan’s vice president. /atm