No more ‘business as usual’: Climate change requires PH to walk the talk 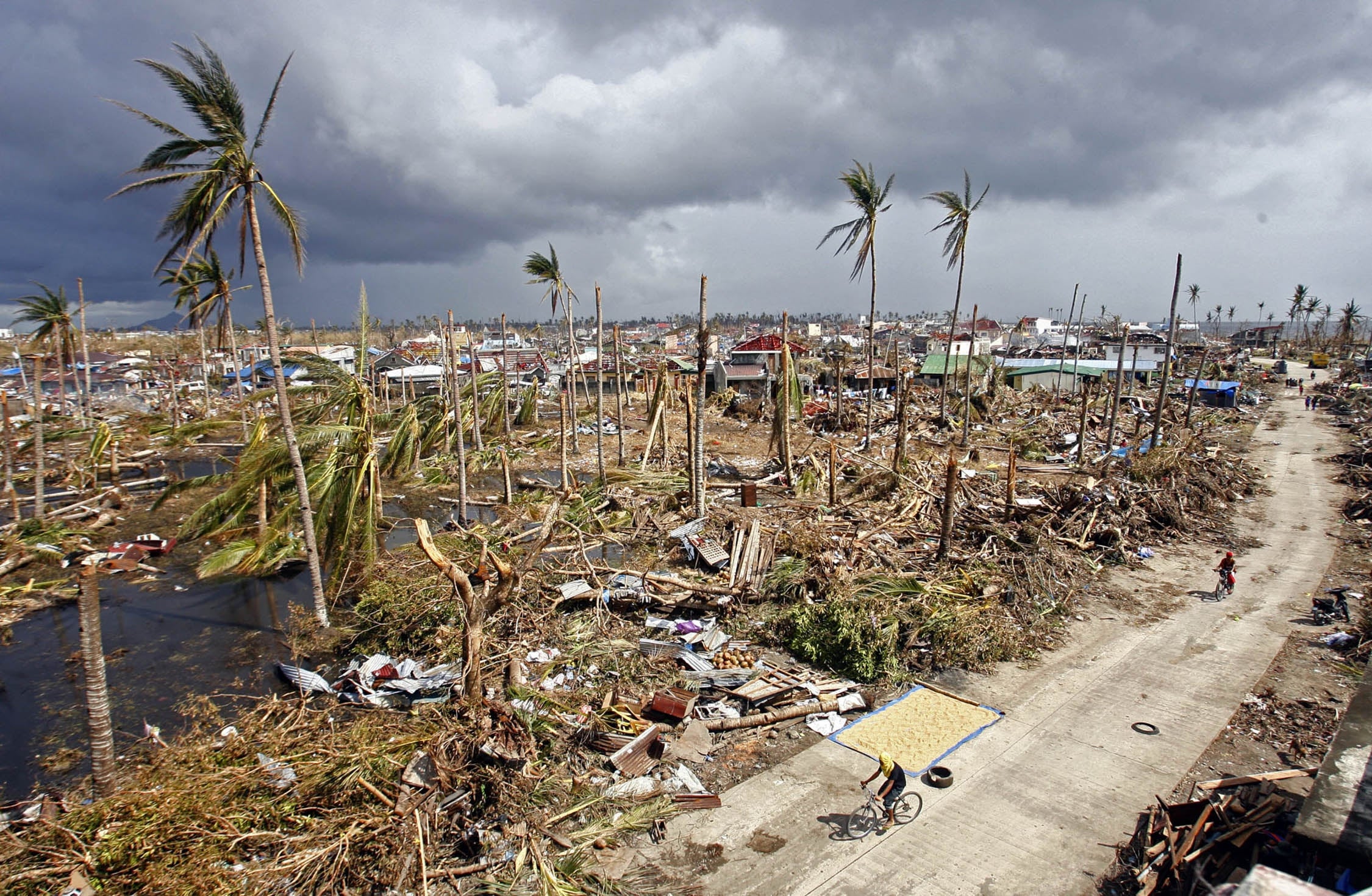 DESOLATE LANDSCAPE A seaside barangay in Palo, Leyte, is left in ruins by Supertyphoon “Yolanda” in 2013. —INQUIRER FILE PHOTO

She remembered her panic at the sight of rapidly rising water, made worse by the swollen Marikina River that was only a few blocks away. There was no time to flee. The water quickly reached the second floor of her three-story house, pushing her entire family to the topmost floor—and nowhere else to go.

Sonajo prayed the water would not go any higher.

“It was unlike anything else I’ve ever seen,” said the 53-year-old mother, who has lived in Marikina City since 1987.

The flood did not breach their refuge, but it trapped her family of six, along with several neighbors from low-lying houses who scrambled to her home for safety.

“Since then, fear grips my heart every time there’s heavy rain,” Sonajo said.

Nearly a decade since it struck in September 2009, Ondoy remained a constant topic in conversations involving disasters and has set into motion climate talks across several sectors. Four years later, in November 2013, Supertyphoon “Yolanda” (international name: Haiyan) would further bare the Philippines’ vulnerability to climate change, as over 6,000 people died and at least 4 million were displaced.

In the face of worsening climate-related risks, climate groups said the Philippines should continue to rise as a leading voice of vulnerable nations, particularly as it joins other countries at the 24th Conference of the Parties (COP24) to the United Nations Framework Convention on Climate Change next week.

Set in Katowice, Poland, the high-level meeting is expected to focus on crafting the guidelines for the implementation of the Paris Agreement, a landmark climate accord aimed at capping global temperature at 1.5 degrees Celsius above preindustrial levels.

At the same time, the Philippine government must also walk the talk in urgently addressing climate-related issues at home, according to civil society groups, which are also set to head to Poland to track the negotiations and demand accountability for climate change.

“It is not enough to simply say that rich countries are to blame for climate change,” he added.

Central to the Paris Agreement, which the country ratified in March 2017, was the reduction of carbon emissions that contribute largely to the planet’s rapid warming.

In 2015, the Philippines committed to slash its emissions by 70 percent by 2030 as its nationally determined contribution (NDC). This commitment, which was conditional on foreign aid from developed nations, focused on reductions in particular sectors, including waste, industry, transport, forestry and energy.

Yet at present, the government’s plan of action for its NDCs remained unclear.

Secretary Emmanuel de Guzman, vice chair of the Climate Change Commission (CCC), said it was still in the process of revisiting and reviewing the NDC commitment, considering the country’s projected growth.

Earlier, President Duterte, who also serves as CCC chair, said that efforts to address climate change should not hinder the country’s path to industrialization.

What is clear, De Guzman said, is that the country can no longer afford to be “business as usual.” He cited the recent report of the Intergovernmental Panel on Climate Change (IPCC) that warned of catastrophic risks without urgent actions to curb emissions.

The IPCC report said even a half-degree difference could worsen floods, extreme heat and drought, and push millions more into poverty.

Despite the country’s commitment to climate action, its continued dependence on coal—a cheap yet dirty fossil fuel—as a source of energy presented a clear challenge and contradiction.

“The Philippines, along with Vietnam and Indonesia, should not hide behind the right to develop as they pursue coal expansion,” said Gerry Arances, executive director of the Center for Energy, Ecology and Development (CEED).

“In order for us to achieve the 1.5-C threshold, all coal-fired power plants should be phased out,” he added.

At present, 25 coal-fired power plants operate across the country, supplying majority of the country’s electricity.

CEED has recorded over 20 more coal-fired plants in the pipeline, which Arances said could make the country a very critical battleground for coal in the coming years.

In order to achieve its climate ambitions, he said the government should focus instead on transitioning to renewable energy sources, such as solar, wind and geothermal.

After all, the Philippines has the 10-year-old Renewable Energy Act, the first such law in Southeast Asia, which was supposed to push for the promotion and development of renewable energy in the country.

All of these actions come with a looming deadline: the IPCC report says the world only has 12 years to enforce radical changes to meet the 1.5-C threshold.

Ian Rivera, national coordinator of the Philippine Movement for Climate Justice, said the government should prioritize finalizing its NDCs to formally lay down the country’s climate targets.

At the COP24, the Philippines should enjoin other countries to put emphasis on mitigation projects, Arances said.

Constantino said that as the government pressed for accountability from developed countries that were historically responsible for climate change, it should also make strategic plans and projects domestically.

“We cannot afford to wait for the rich countries to wake up wiser and give us appropriate [funding],” he said. “If we are reliant on that kind of justice, that is an injustice to our people.”