Turkish man who assaulted Makati traffic enforcer to be deported 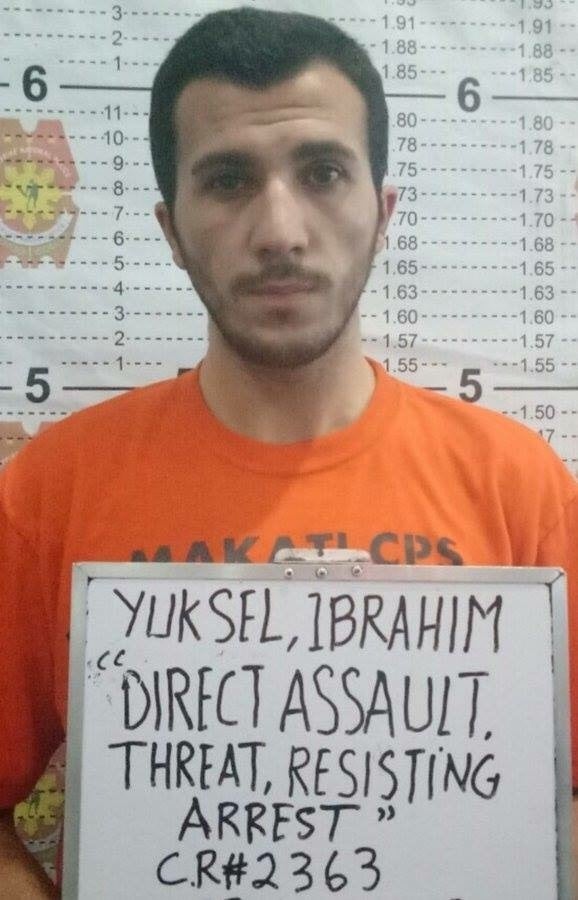 A Turkish national, who gained notoriety after he was caught on viral video assaulting a traffic enforcer of the Makati City Public Safety Department last week, will be deported for being an undesirable alien, overstaying and illegally working in the country.

Yuksel Ibrahim, 24, was about to leave the Makati police station after posting bail for charges of direct assault, threat, resisting arrest and malicious mischief,   when he was arrested anew on Thursday night, this time by operatives of the Bureau of Immigration (BI).

Fortunato Manahan Jr., the chief of BI Intelligence Division, said in a statement that they immediately conducted their own investigation of the foreigner’s status after they learned about Yuksel’s involvement in a traffic altercation.

“We found out that he is already overstaying, and his blatant disregard for the law and disrespect for law enforcers show that he is an undesirable alien,” he added.

Manahan also said that they had verified that Yuksel was “engaging in gainful operations without a proper visa.”

Yuksel was driving his black Honda van and trying to beat the red light at the corner of Gil Puyat Avenue and Bautista Street in Barangay Palanan around 5 p.m. on Nov. 22 when he hit the arm of traffic enforcer Michael Orcino.

The Turk insisted he was “going late for his work.”

Yuksel, who had no driver’s license to show, tried to escape but Orcino managed to block the former’s car with his motorcycle.

The five-minute video, which went viral on social media, showed an incensed Yuksel alighting from his car and dragging Orcino’s motorcyle off the road.

He also physically assaulted Orcino when the latter refused to let him through.

The Turkish national also tried to run over the traffic enforcers who tried to stop him.

Yuksel is now detained at the BI’s detention center in Camp Bagong Diwa in Taguig City, pending his deportation.—WITH A REPORT BY JOVIC YEE