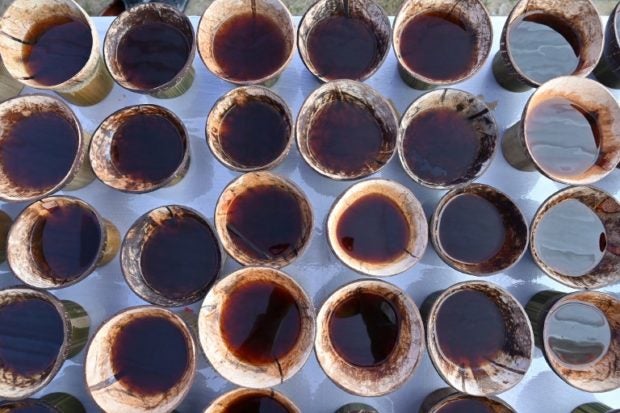 BATUSANGKAR, Indonesia — Thousands of Indonesians lined up to get their mug of Java in the hopes of keeping alive a coffee tradition that dates back to Dutch colonial times.

“Everyone get your cup ready!” yelled an announcer to some 4,000 locals and visitors who sipped Kawa Daun coffee at a festival this week in Batusangkar on Sumatra island.

The area is home to a peculiar take on the drink that extracts flavor from the plant’s leaves rather than its beans.
It is an old-fashioned brew dating back to the colonial period when few locals could afford bean-extracted coffee.

So they boiled the throwaway leaves instead and served up the bitter beverage in cups made from dried coconut shells.
“I’m happy that we got to 4,000 cups of coffee — it’s a new local record,” declared Abdul Hakim, head of the local tourism office.

But folks in this remote pocket of Indonesia will have their work cut out to smash a national record set last year which saw some 1.9 million people sip a cup of coffee made the usual way.

At an open-air coffee shop near the festival, 37-year-old Efrizon was sipping a cup of Kawa Daun away from the caffeinated masses.

“It’s good for you and makes your body feel warm,” he said of the local drink.

“And you’ve got this unique coconut shell to drink from instead of a glass.”

The coffee competition is part of the five-day Minangkabau arts and culture festival, including a culinary ceremony known as Bajamba where hundreds of women walk in a procession with large, food-packed trays on their heads.

Their destination is scores of hungry revellers who sit on the floor across from each other, ready to tuck into local chili-infused dishes and a hugely popular slow-cooked curry known as rendang.

On Saturday, dozens of fearless racers will clasp the tails of angry bulls for a wet-and-wild race across rice paddies. /ee