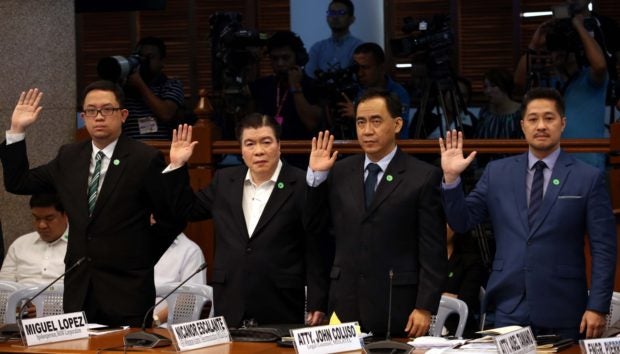 Senators on Tuesday raised concerns that China would gain control of the country’s third telecommunication company despite the 40-percent cap on foreign equity and that state-owned China Telecom posed a threat to national security.

But officials assured the lawmakers that there would be security checks in place.

They also pointed out that the two existing telecommunication players in the country were mostly using Chinese equipment anyway.

China Telecom would have a 40-percent stake in the Mislatel consortium that was recently declared the third telco player in an effort by the Duterte administration to break the duopoly of PLDT Inc. and Globe Telecom, and improve internet service.

Rival bids by PT&T and SEAR Telecoms were rejected.

Udenna Corp. would take up 35 percent of Mislatel, while its subsidiary, Chelsea Logistics, would have 25 percent.

Udenna and Chelsea are both owned by Davao businessman Dennis Uy, who was among President Duterte’s top donors in the presidential campaign in 2016.

Sen. Francis Escudero said nothing would prevent Udenna and Chelsea Logistics from borrowing money from China Telecom for the capital infusion. This would effectively give China Telecom full control of Mislatel, he said.

“You very well know there’s a shareholder agreement with creditors like China Telecom that you can give your proxy votes to them, which is a way around the 60-40 limitation [on foreign ownership],” Escudero said.

The three companies could very well come up with a side agreement stating that the voting rights would be equivalent to whatever they paid out, Escudero pointed out.

“How do you guard against that? It’s a foreign entity that will have controlling interest and say as far as telecommunications is concerned,” he said.

National Security Adviser Hermogenes Esperon said he would leave it up to the Securities and Exchange Commission (SEC) to handle the matter.

SEC general counsel Camilo Correa said that if there was a voting agreement, the one with voting rights would be considered the true beneficial owner.

“We will make it a point that we will comply with all the legal and constitutional requirements of having a Filipino telecommunications company,” Mislatel spokesperson Adel Tamano told reporters.

Sen. Leila de Lima, in a statement, questioned the award of the third telco status to a company owned by Uy, saying there was a need to look into other deals he had already bagged.

Many things do not seem right in the award of the third telco player, De Lima said.

She pointed out that months before the bidding began, Mr. Duterte had said he favored a Chinese company.

“The alarm bells on Duterte cronyism are ringing loud in Dennis Uy’s Pacman-like gobbling of government contracts, the foremost being the telco award to Mislatel,” she said.

At the hearing, Sen. Grace Poe, who chairs the committee on public services, raised questions about China Telecom.

Poe said it had been reported that China Telecom hijacked internet traffic and rerouted traffic directed to South America, Milan and Japan through different servers.

“Are we allowing a substantial control of a portion of our internet traffic, for the purpose of furthering their interests?” she said.

Pierre Galla of the group democracy.net.ph said there was no hijacking by China.

What happened, Galla said, was an error by a Nigerian firm that resulted in a misrouting to China.

Since China has a great firewall that does not accept traffic from Google, the search giant thought there was hijacking, he added.

Poe wondered whether the Philippines was capable of mitigating the risks.

“Can we trust them to accord the same respect for the privacy of communications and correspondence? Do we believe that they will not obtain valuable information to stir up insurrection, or to prejudice the Filipino consumer?” she said in her opening statement.

Esperon said Mislatel would have to undergo background checks for 90 days.

He assured Poe that the country had the capability to prevent a breach of its national security and to stop interference.

Communications Technology Secretary Eliseo Rio Jr. noted that 90 percent of the equipment being used by the country’s two major telecommunication companies were Chinese-made.

But the stakes are even higher for the third telco because in case of cybersecurity breaches, the government would forfeit their P25-billion performance bond and take back their frequencies, he said.

In some countries like Australia and the United States, Chinese telcos have been questioned because of security threats.

The federal government said the “involvement of vendors who are likely to be subject to extrajudicial directions from a foreign government that conflict with Australian law” posed a security risk.

In 2012, Huawei was blocked from bidding for contracts in Australia’s ambitious national broadband project reportedly due to concerns about cybersecurity.

The US government has long been wary of Chinese companies having access to American telecommunication networks.

A 2012 congressional report found ZTE and Huawei posed significant national security threats and could not be trusted to be free of foreign state influence.

The US Department of Defense has also stopped selling ZTE’s mobile phones and modems in stores on its military bases, citing potential security risks.

Washington lifted its ban on ZTE in July after US President Donald Trump said the punishment was too harsh and fines were renegotiated. —WITH A REPORT FROM INQUIRER RESEARCH