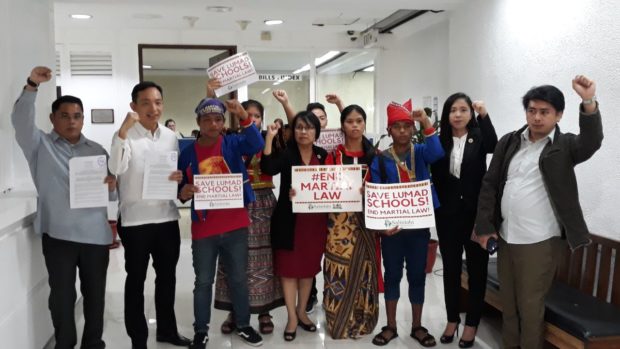 PHOTO from the House Makabayan bloc

The House Makabayan bloc has filed a resolution condemning the alleged efforts of the elements of the 56th infantry battalion and the paramilitary group Alamara to “forcibly close” a Lumad school in Davao Del Norte.

The Salugpongan Learning Center in Talaingod town was reportedly forced to close “through threats, harassment, and intimidation of teachers, students, and community members.”

The progressive lawmakers said classes in Salugpongan Learning Center’s campuses in Talaingod had been disrupted since the arrival  of the 56th Infantry Battalion in June 2018 and their encampment in Sitio Nasilaban and Sitio Dulyan in Barangay Palma Gil.

Salugpongan Ta’Tanu Igkanogon Community Learning Center Inc (STTCLCI) is a Lumad community school established in 2007 with the support of religious groups. It is recognized by the Department of Education (DepEd) to implement the Indigenous Peoples’ Education.

The opposition solons said the military conducted an aerial bombing operation in Sitio Tibucag in Barangay Dagohoy on August 27, 2018, which “traumatized students and teachers in the Salugpongan campus.”

In the past few months, this battalion and its paramilitary group Alamara have also reportedly “forcibly closed the Nasilaban campus by padlocking the school and harassing the teachers and students.”

On October 25, elements of the 56th IB along with the Alamara allegedly forced tribal leaders to sign a petition demanding the closure of the Salugpongan school in Nasilaban and the eviction of the teachers within one week.

On November 24, several community leaders in Sitio Nasilaban were also reportedly threatened to sign a petition letter to “forcibly evict the teachers and students in the whole of Talaingod.”

They were also “beaten by soldiers, and they were held at gunpoint,” according to the Makabayan bloc. /ee