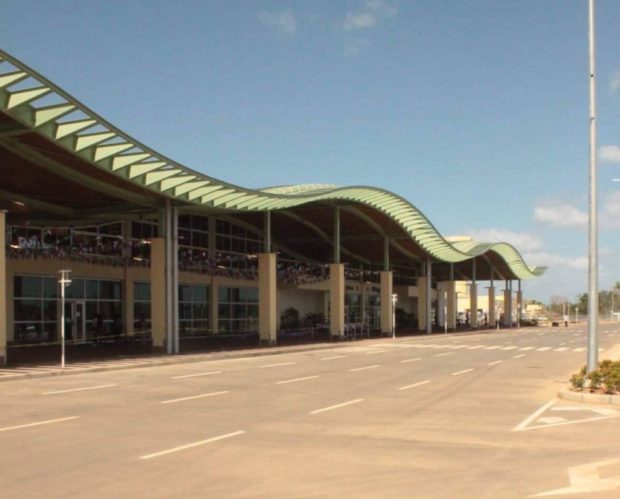 The Bohol Panglao International Airport will open on Tuesday. Photo by EDCOM

PANGLAO, Bohol – President Rodrigo Duterte will lead the historic inauguration of the Bohol Panglao International Airport (BPIA) in this tourist-island on Tuesday.

Duterte is expected to arrive in Panglao Island at 4 p.m. on Tuesday.

The P8.9-billion airport, considered the country’s first “eco-airport,” boasts of organic architectural design that features undulating roofs mimicking the Chocolate Hills or the waves in Panglao beaches, a rainwater collection and treatment facility that recycles collected water for the facility’s common use, solar panels for lighting, efficient natural ventilation or directed air-conditioned areas as well as efficient LED lighting which are controlled by motion sensors.

It is designed to accommodate two million passengers, according to the Department of Transportation (DOTr).

It would replace the Tagbilaran City Airport, the 11th busiest airport in the country, which would be decommissioned as the Panglao airport transitions into full operations.

After conceiving it 26 years ago, and after 15 years in the drawing board, with several politicians claiming their administration would have it finished by the end of their terms, the BPIA is now a reality.

Economic development officials said it would bring hundreds of jobs to Bohol.

More than just the gateway to Bohol’s piece of paradise, the airport has an important role in the region’s ability to attract and retain the businesses that create multiple economic and social benefits.

This as President Duterte officiates the formal launching of the country’s acclaimed first eco-airport and the newest hub in the region.

The new two-kilometer airport runway has also served earlier test flights and would be better than the cramped and obstruction-filled Tagbilaran Airport.

Set in nearly 14,000 hectares of open land complete with a runway 200 meters longer than that of Tagbilaran, BPIA also features a bigger two-story Passenger Terminal Building (PTB) with three multi-angled Passenger Boarding Bridges and apron that can accommodate seven aircrafts and one on a remote stand and segregated domestic and international flight services.

The new facility also boasts of an upgraded Instrument Landing System, while it can immediately accept night flights, unlike the sunrise to sunset limitation in Tagbilaran airport, according to DOTr BPIA Project manager Engr. Edgar Mangalili.

After the inauguration, Duterte will visit Camp Rajah Sikatuna in Carmen town for the turnover of National Housing Authority housing units to the military and police and awarding of medals to soldiers with achievements and the ceremonial distribution of firearms.