Duterte threatens to have bishop’s head cut off | Inquirer News

Duterte threatens to have bishop’s head cut off 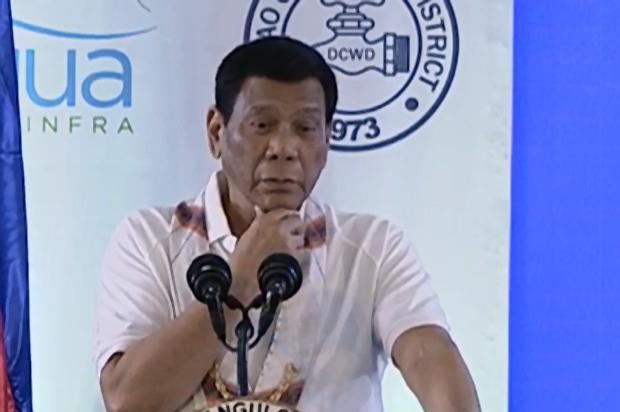 President Rodrigo Duterte lead the groundbreaking of the bulk water supply project of Aboitiz Equity Ventures and its partner firm in Barangay Gumalang, Baguio District in Davao City on Monday, Nov. 26, 2018. (Photo from an RTVM video)

DAVAO CITY — President Rodrigo Duterte warned on Monday he would cut off a bishop’s head if the latter was found to be selling illegal drugs.

But the President did not name the bishop he was referring to, even as he renewed hitting the Catholic Church, accusing bishops of corruption and asking cars and other favors from the government.

[Bishop, if you are selling drugs, I’ll have your head cut off.]

Earlier, in his speech, however, he had lashed out at a certain “Bishop David,” for believing in an “archaic” faith and engaging in the corrupt practice of asking cars or favors from the government, among others.

“The Catholic Church and Bishop David is clinging to a belief 3,000 years ago,” the President said. “How can people 3,000 years ago predict what is happening today?”

The President made these remarks in a speech he delivered said during the construction kick-off ceremony of a bulk water supply project in Barangay Gumalang, Baguio District here.

He said the “archaic” church was only good at making money.

Without naming names, Duterte said bishops had been asking cars and favors from government, knowing fully well it was corruption.

“And you have the balls [to criticize], brave as you are, to ask for cars from the government?” he asked.

[I’m beginning to suspect why you’re frequently roaming around at night. I suspect that you could be involved in drugs.]

Days earlier, the President had accused a certain “Bishop David” of taking money from donations to benefit his family.

It prompted Caloocan Bishop Pablo Virgilio David, one of the most vocal critics of the President’s war on drugs, to reply, saying the accusations could have come only from a “sick” man.

The bishop asked the public to pray for the President. He also said he had been taught by his parents not to steal.

The Presient also reminded the bishops about a challenge he made during the early days as presidency to fight illegal drugs. /atm