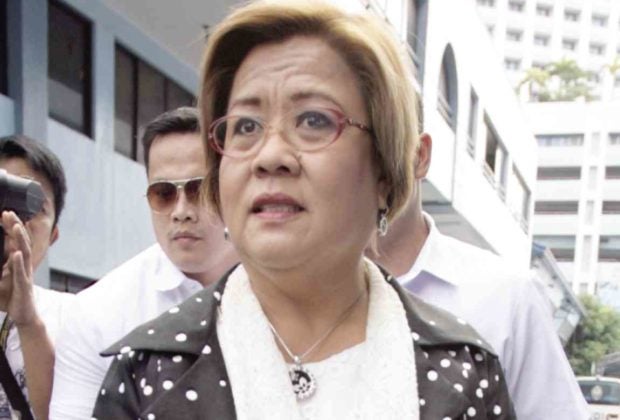 Detained opposition Sen. Leila de Lima has asked the Court of Appeals to bar 13 convicted criminals from testifying about her alleged links to the illegal drug trade inside the New Bilibid Prison in Muntinlupa City.

In a 26-page petition for certiorari and prohibition, she urged the appeals court to overturn the Sept. 24 ruling of Judge Lorna Navarro-Domingo of the Muntinlupa Regional Trial Court which denied her request to prevent the convicts from taking the witness stand.

The senator, President Rodrigo Duterte’s most vocal critic, said the convicted felons were not common witnesses “but [were] state witnesses admitted illegally” into the Witness Protection Program of the Department of Justice.

According to De Lima, this was in violation of Section 10 of Republic Act No. 6981, or the “Witness Protection, Security and Benefit Act.”

“The Supreme Court has ruled that allowing convicted criminals previously [found guilty] of crimes involving moral turpitude to testify as state witnesses is arbitrary and a gross violation of the rules,” she said in her Nov. 19 petition.

She cited the case of Basa and Zari vs Flores, where the Supreme Court cited crimes that involved moral turpitude as robbery, murder, homicide and violations of the drug law.

Agojo, Co and Sy are serving time for drug-related cases; Arile, Baligad, Capones and Durano were convicted for murder or homicide, while Colanggo is in prison for robbery with homicide.

Tan was sentenced for robbery and murder, while Magleo, Martinez, Patcho, Trestiza and Arile are serving life sentences for kidnapping. —With a report from Gabriel Pabico Lalu