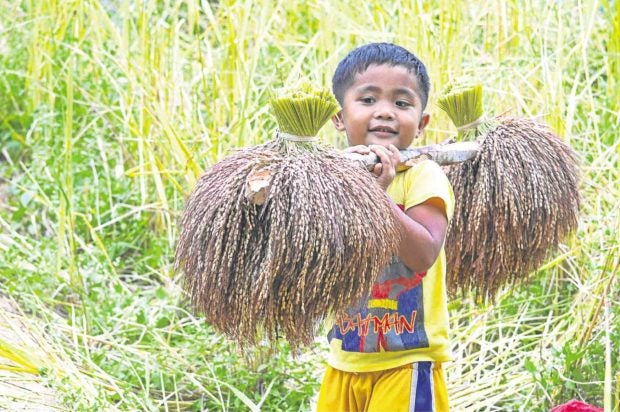 BANAUE, Ifugao — The rice terraces of Ifugao have been hailed as examples of indigenous engineering ingenuity, with small forests at the top of mountains delivering water down to rice paddies shaped like staircases to capture water and maintain soil minerals.

But what sustains these architectural wonders are the rice ritual cycles, which are equal parts pest management and soil conservation techniques, because traditional rites follow the peculiar behavior of the seasons as well as insects and animals that thrive nearby.

Preserving and practicing indigenous knowledge have become the core ideas behind a five-year, P4.125-billion plan to conserve and rehabilitate many of the rice terraces in the Cordillera.

The development plan requires every agency, group and people involved in rice terraces conservation to unite and revitalize the centuries-old rice cultures of the Benguet towns of Kibungan, Kapangan and Kabayan; the Ifugao towns of Asipulo, Banaue, Hingyon, Hungduan, Kiangan, Mayoyao and Tinoc; the Mountain Province towns of Barlig, Bauko, Besao, Bontoc, Sabangan, Sadanga, Sagada and Tadian; and the Kalinga towns of Balbalan, Lubuagan, Pasil, Tanudan, Tinglayan and Pinukpuk.

The new plan was presented to local governments, agencies and scholars at a conference here on Nov. 21.

The five-year plan seeks the creation of a Cordillera terraces office to oversee the development plan. In 2008, the late Sen. Edgardo Angara filed a bill seeking to create the Cordillera Terraces Authority, which would formulate a 10-year Cordillera terraces master plan. It has been marked pending at the committee level since 2010.

Because rice farming is heavily dependent on irrigation, the plan also aims to increase the region’s forest cover by 10 percent.

Aggravated by surging inflation, the high cost of production and maintenance remains the top problem that plagues terrace farming, according to Leah Enkiwe-Abayao, director of the Cordillera Studies Center at the University of the Philippines in Baguio.

These issues continue to discourage farmers from maintaining their family terraces, she said, leading some to abandon rice farming for better yielding cash crops or leave farming altogether for other jobs.

Still unresolved is the lingering generational crisis involving younger Cordillerans who lack interest in retaining their family terraces, she said.

HERITAGE SITE The rice terraces of Hapao in Hungduan town, Ifugao province, have been included in the list of Unesco’s World Heritage Sites. These paddies, where heirloom rice is grown, have sustained generations of Ifugaos. —REM ZAMORA

In Sagada, Jaime “Ama Tigan-o” Dugao, an elder, said the young preferred to be tour guides because rewards were immediate.

Climate change may also be the culprit for reduced water supply despite the increase of forest covers, he said.

In Ifugao, climate change has disturbed the traditional rice cycle, which could have spoiled or nullified certain rituals, according to Roscoe Kalaw, provincial tourism officer.

Farmers, however, fear the conservation plan would be undermined by the administration’s “Build, Build, Build” infrastructure program. “Conservation is not among [the] government’s impact projects as it does not actually promote building large or more infrastructure,” said Nestor Peralta, a farmer from Tinoc town.

He said the preservation plan needed to learn from the Ifugao experience as conservation efforts were “easy to discuss but are in reality hard to address.”

Read Next
Lorenzana: Troop deployment to ensure peaceful polls
EDITORS' PICK
UK’s Boris Johnson will resign, BBC reports
Unemployment rate up to 6% in May
Geek out at TOYCON 2022 powered by Smart Signature
High inflation: Your P1 is now worth only 87 centavos
High-risk pregnancy: Reducing your risk is in your hands
House energy committee chair Arroyo bats for cheap electricity
MOST READ
Suspect in grisly killing of missing woman in Bulacan arrested
Kim Atienza’s daughter flaunts bikini body in response to critics of her ‘revealing photos’
Japanese artist who created ‘Yu-Gi-Oh!’ found dead in the sea
UK PM quits as Conservative leader
Don't miss out on the latest news and information.