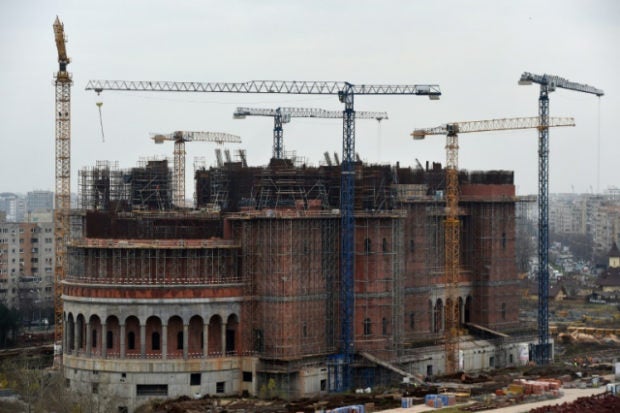 Tens of thousands of worshippers attended the consecration Sunday of a massive new Orthodox cathedral in Bucharest, amid criticism that public funding for the project could be better used to pay for hospitals and schools in one of the EU’s poorest members.

Construction of the Romanian People’s Salvation Cathedral in Bucharest began in 2010 and is only scheduled to be completed in 2024.

But the consecration mass on Sunday — celebrated by the Ecumenical Patriarch Bartholomew of Constantinople and Romanian Patriarch Daniel — was attended by worshippers from all over the country, with huge crowds congregating in front of the building site, which was shrouded in fog, to follow the ceremony on giant screens outside.

“It’s a very special event. And I definitely wanted to be here because the cathedral symbolizes the centenary of Romania,” founded on December 1, 2018, Ion Duta, a pensioner from Bucharest, told AFP.

“The costs are certainly high, but at least the Church has shown that it can build such a project. Our elected politicians are incapable of constructing motorways,” said another worshipper, who only gave her first name as Georgiana.

Only around 2,000 people — mostly officials and donors — were allowed to attend the mass inside.

But after the ceremony was over, the crowds outside were allowed in and long queues of people formed to take their turn to catch a glimpse of the inside.

Many of the worshippers had arrived early to grab the best spots, and the emergency services said around 100 people needed medical assistance because of the cold and exhaustion.

Situated in the center of the capital city behind the pharaonic Palace of Parliament of former communist dictator Nicolae Ceausescu, it will have the capacity for as many as 5,000 worshippers.

Originally, the cost was estimated at around 80 million euros ($91 million), but it has already spiraled to 110 million euros and tens of millions more are expected to be spent before it is completed.

With around 75 percent of the amount already paid for by public funds, the cost has created controversy in a country where investment in dilapidated infrastructure is badly needed.

Around 88 percent of the population of a total 20 million are Orthodox.

The Patriarchate argues that Romania “needs a representative national cathedral, which symbolizes faith, freedom and dignity of the people.”

Despite criticism about the costs, successive governments over the past decade have put up the money in the hope of winning the support of the powerful Orthodox Church in return. CC