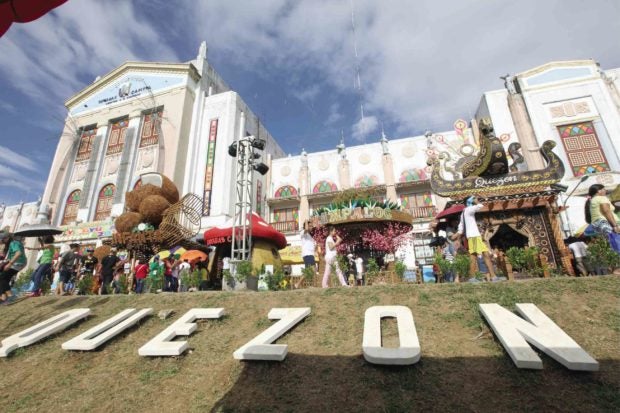 COCONUT CAPITAL The province of Quezon in August celebrated the Niyogyugan Festival as a tribute to its main industry, coconut production. —PNA

LUCENA CITY — A piece of legislation, which has been described as the government’s Christmas gift to coconut farmers is just two steps away from becoming law.

Sen. Cynthia Villar, chair of the Senate agriculture committee, said the bill creating a trust fund for more than P100 billion in levy collected from coconut farmers by the Marcos dictatorship had been approved by panels of the two chambers of Congress.

After the Senate and House of Representatives pass the bicameral version of the bill, Villar said President Rodrigo Duterte was expected to quickly sign it into law.

Its passage into law by Christmas will be a gift to farmers, said Villar, who was here on Saturday as a guest of the provincial government for the annual assembly of the province’s senior citizens.

The new version of the bill would inject the more than P100 billion in coconut levy to the Coconut Farmers and Industry Trust Fund, which would be used solely for programs for coconut farmers and the development of the coconut industry.

“It is the best gift to coconut farmers,” said Villar.

She said she would ask President Duterte to give the measure as a Christmas gift to farmers.

Quezon Gov. David Suarez said he, too, was appealing to the President to give the measure as a Christmas gift to coconut farmers.

The bill’s signing into law, the governor said, “will be a fitting Christmas gift” for coconut farmers, who were now struggling with low prices of copra.

Suarez said coconut farmers in Quezon had long been waiting for the release of the coconut levy fund.

Quezon is one of the major coconut-producing provinces in the country.

Its farmers were believed to be the biggest contributors to the coconut levy fund.

Villar said the new version of the bill revised some provisions like the composition of the Philippine Coconut Authority (PCA) board, which would manage the fund.

The new composition of the PCA board, Villar said, would be more favorable to farmers.

The bill created seats for more government representatives in the PCA board — from the Department of Trade and Industry, Department of Science and Technology and Land Bank of the Philippines.

Villar said this would contribute to the advancement of the coconut industry.

But Villar reiterated an appeal to farmers not to depend solely on copra.

She urged them to diversify and plant other cash crops, like coffee and cacao.

The government, she said, could not prevent the decline in prices of copra because these were dictated by the international market.

Malacañang demanded that the PCA board be composed of majority government representatives. The old version of the bill provided for six seats for farmer representatives in the board and only five for government officials.

The new version of the bill provided that government officials would have eight seats in the board.

A seat would be reserved for a representative from private businesses.