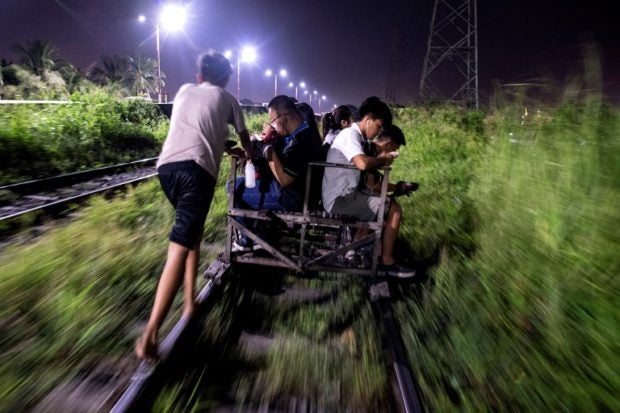 This picture taken on October 18, 2018 shows a “trolley boy” (left) pushing a home-made cart along a train track in Manila. AP

MANILA, Philippines — As soon as the train rumbles past, the men heave their home-made pushcarts back onto the tracks and passengers hop aboard — cheating death and beating Manila’s notorious traffic.

Scores of commuters in the city of about 12 million are propelled to their destinations daily by so-called “trolley boys” pushing metal carts that ply a few segments of the sprawling capital’s railroads.

Passengers save time and money — paying just 10 pesos (20 US cents) a trip — but must face the constant risk of being crushed by a passing locomotive if they or the trolley boys don’t move fast enough.

“Our job here is very dangerous, you need to know what time the train will pass by,” said 57-year-old Rene Vargas Almeria, who has been at it for nearly 20 years.

Commuter trains travel nearly two dozen times a day along this 1.2-kilometer stretch of rail in the Santa Mesa district, where authorities grudgingly tolerate the carts due to their popularity.

The trolley boys also ply a few other stretches of Manila’s battered rail system, that carries an average of 45,000 passengers a day.

Incredibly, casualties are relatively rare. Police do not keep statistics, but said they couldn’t remember the last time a fatality occurred.

The same cannot be said of close calls — anyone who spends time pushing or riding the carts seems to have a hair-raising story to share.

Rodolfo Maurello’s scariest near-miss in almost two decades as a trolley boy came when he failed to notice the train behind him as he was pushing a cart packed with passengers.

“The train was just metres away,” the 60-year-old said, recalling how he turned around with only seconds to spare and waved it to a stop.

“The sound of its brakes screeching was very loud.”

Almeria has a similar tale, which happened one day when his mind wandered and his sole passenger was looking the other way.

“I swung my head around and saw the train coming and yanked my trolley off the tracks,” he added. “It was really close.”

On a good day the trolley boys can make up to $10, ferrying passengers seeking to escape Manila’s infamous gridlock — a collision of poor infrastructure, weak public transit and an increasing number of cars.

Even as Manila’s population grew 50 percent from 1995-2015, investment in the city’s creaking transport system has not kept up, opening a gap for informal options like the pushcarts to fill.

Most journeys lack life-or-death drama, with workers in office attire and students clutching their lunch bags and pecking at their smartphones, a tattered beach umbrella providing the only protection from the burning sun or frequent downpours.

“There is no traffic,” 46-year-old Noemi Nieves told AFP. “It is convenient for us and the fare is just right for our budget.”

Despite the risks and minimal comforts, commuters say the trolley carts offer a welcome shortcut to spending hours in traffic only to travel a few kilometers.

Danica Lorraine, 25, shaves nearly an hour off her daily commute, spared from having to take two additional buses each way.

“You just need to be cautious — very, very, very cautious,” she said.

Kerkleen Bongalon, a teacher, has — for the most part — gotten over her unease at riding the carts.

One stretch of her journey passes over the Pasig river — with a 15-meter plunge between the rail tracks and the water below.

“At first it was scary,” she said. “I don’t know how to swim so if something happens while we are on the bridge I really don’t know what would happen.”

“But nothing will happen because the trolley boys know the time the train will pass by,” she added.